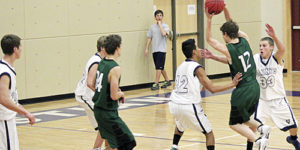 RANGELY I The Rangely boys’ basketball team went on the road last weekend and lost two games, one in Wyoming and another in Colorado. The Panthers lost 41-78 in Baggs, Wyo., to the Little Snake River Rattlers, the defending 1A state champions and currently ranked No. 1, before losing their first league game 37-68 to the Vail Christian Saints Saturday.
“We started off pretty good with good defensive intensity and discipline on offense,” head coach Eric Hejl said of the Wyoming game. “Connor (Phelan) hit three from beyond the arc and had all 10 of his points in the first half.”
Hejl said his team had an early lead and the score was tied at the end of the first quarter.
“Unfortunately that was the best quarter of the night,” Hejl said.
The Rattlers struck in the second period outscoring the Panthers 24-11 to take a 42-29 lead at halftime.
“Baggs is one of those teams if you let them get rolling it’s hard to slow them down,” Hejl said. “To start the second quarter, we were still within striking distance but a run of turnovers and poor shooting in the third quarter did us in. We had two kids that were suspended and a couple more injured so that hurt our depth a little bit and the tempo that Baggs plays at was just too much for us to keep up with.”
The Panthers only scored four points in the third quarter and doubled it in the fourth but the Rattlers put 18 points on the scoreboard in both quarters to put the game away.
“We get to play them again at our place in January and hopefully we’ll be more prepared next time around,” Hejl said.
Ethan Peacock led the Panthers with 13, Phelan 10, Kody Denny seven, Jake Massey six, Cameron Enterline three and Andrew Morton two.
The Panthers traveled from Wyoming to Glenwood Springs for their game against Vail Christian, arriving at 1:30 a.m. Saturday morning.
“It’s definitely not an excuse for our play but it’s definitely not the best way to rest up for our first conference game either,” Hejl said of the long bus trip.
Hejl said fatigue did not seem to be an issue as Phelan, Denny and Enterline all hit threes at the start, helping the Panthers take a 13-5 early lead but they trailed 14-15 at the end of the first period.
“Our shooting went a little cold in the second quarter and we also gave them some easy chances off of turnovers,” but the Panthers only trailed by four at halftime.
“Unfortunately the fatigue from the weekend must have set in between halves because they way things went in the third quarter you would’ve thought an entirely different team had come back out on the the floor,” Hejl said. “By the end of the third quarter, what was a four-point game had ballooned into an insurmountable 25 point lead for the Saints. We beat VCHS in a dogfight last year and I thought this year it would be a similar type game but unfortunately we only showed up for a half this time around.”
The Panthers will enjoy Christmas break before opening 2012 with games against Plateau Valley and their first home game against DeBeque on Jan. 7.
“Even though we don’t have the wins and statistics to back it up, I’m still very pleased with the progress we’ve made before the holiday break,” Hejl said. “We’re still searching for our identity as a team. This year we are much more balanced, which is good most of the time but sometimes it is nice to have one guy you can lean on when things get tough. We are still figuring out who that guy or more likely those guys are going to be.
“I fully expect to compete for a league championship come late February and I think my guys would tell you the same thing. These guys are resilient and want to win. Now that they’re backs are up against the ropes a little bit, we’ve just gotta come out swinging and we’ll get ourselves right back into the fight when it matters most.”

Listen to this post RBC I The Meeker High School wrestling team will open the 2011 portion of the season tonight at home, with a dual against Coal Ridge, starting at 6 p.m., while the […]

Listen to this post RBC I Both ends of the county were well represented at last weekend’s all-state basketball games. Stacey Fitzgibbons, who was recently graduated from Meeker High School, and Patrick Phelan, who was […]

Listen to this post RANGELY | The Rangely Panthers started their week with a match with West Grand on Tuesday, Feb. 23. It was definitely a defensive game with both teams coming out strong and […]