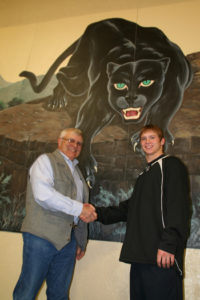 RANGELY I Even though they were missing some of their team members, Rangely Junior High’s wrestling team had some strong individual performances in last weekend’s season-opening tournament at Craig.
Ketson Rouse, a sixth-grader, wrestled at 60 and 75 pounds and won twice for the Panthers.
“He wrestled a kid who weighed 75 and pinned him,” Rangely coach Derek Stolworthy said of Rouse.
Heath Peters was 2-1 and “did real well” at 85 pounds, Stolworthy said.
At 120 pounds, Lucas Heinle went undefeated at 3-0, including two pins.
“A lot of our kids were ineligible, unfortunately, because of grades,” Stolworthy said. “But they have their grades up. So we’ll have a full squad at Hayden (site of this Saturday’s tournament).”
They may not have the big numbers, but the Rangely Junior High and youth wrestling programs are making strides.
“Right now, we have 12 guys, which is not very many,” Stolworthy said of the junior high team. “We’re still trying to get the youth program built up better. I’m looking forward to some of these guys moving into high school next year. We’ll have some kids coming up who will be going into the ninth grade and I’m positive some of them will make varsity.”

Listen to this post RBC I The Meeker Chamber of Commerce Member of the Week is White River Inn. To read the story, go to www.meekerchamber.com.

Listen to this post The Meeker Herald — 125 years ago • Yesterday was the coldest day of the season – 12-below zero. • Meeker is to have another barber shop. Mr. Williams, a newcomer, […]

Williams: Listen to your heart

I want to start by congratulating the class of 2010 on your great success.
It’s an honor for me to be here. I know that many of you, both graduates and parents, have been waiting for this day for many years. […]