Peggy Rector of Rangely, left, was recognized last Saturday at the Colorado Northwestern Community College Foundation’s annual dinner for her tireless efforts on behalf of CNCC and its foundation. 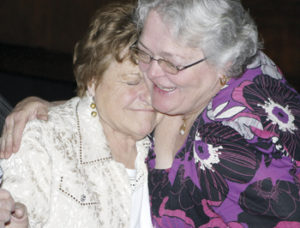 The award was presented by Lois Wymore, right, and Jane Hume, who, along with Rector, are members of the foundation’s board of directors. Rector is president of the board. “She’s relentless,” Wymore said of Rector. “She’s like our little engine that could.”
CNCC President John Boyd announced the foundation had reached 80 percent of its major gift campaign, with $6.6 million pledged so far, including a gift last week of $36,000 from Chevron. The campaign runs through the end of the year.

Listen to this post The Meeker Herald — 125 years ago • A meeting of the taxpayers in School District No. 2 was held to consider levying a 2 mill tax for school purposes. Mr. […]

Listen to this post RANGELY | Last Thursday Better City hosted a well-attended public forum on economic and community development in Rangely. There were approximately 70 people in attendance. The meeting was designed to gauge […]