RANGELY — Like the reissuing of a classic book, the nearly 40-year-old Rangely Public Library has a new look. 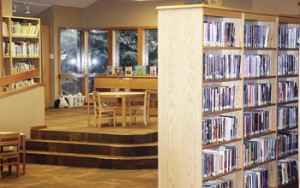 The library’s interior has undergone an extensive renovation, thanks to a couple of grants totaling about $60,000 from the County Capital Improvement Trust Fund. The remodel, which was also funded by library reserves, includes new carpet, paint and shelving, as well as the addition of a new computer lab.
“It is awesome,” said Amorette Hawkins, director of the Rangely Regional Library District. “It doesn’t even look the same. I didn’t even envision it looking this beautiful.”
Hawkins, who has been director of the library for four years, has a long family history with the library. Her grandparents, Les and Ila Powell, both signed the petition to form the library district.
“They probably never thought their granddaughter would someday be the library director,” Hawkins said.
The library was built in 1971.
“I’m pretty sure the carpet was original,” Hawkins said. “It screamed, ‘I love the ‘70s.’”
Not only did the walls and floor receive a facelift, but the layout of the library was redesigned. Board member Vicki Douglas’ brother, an architect from California, did the design work for the library pro bono.

“We actually had the entire library reconfigured,” Hawkins said. “Nothing is where it used to be use. We shifted and moved everything around to make the best use of space.”
As part of the remodeling, the library requested a handicap accessibility audit, to bring the building in line with Americans with Disabilities Act requirements.
“We voluntarily asked for an ADA audit,” Hawkins said. “So, while making (the other interior changes), we could bring things in line with ADA regulations.”
The new computer lab includes a handicap station and the front entrance to the library now features an automatic handicap door.
“We upgraded the computers and added three more computer stations, and one of those is a handicap station,” Hawkins said. “We used to have computers just scattered throughout the library, crammed here and there. Now it will be an actual computer lab.”
Work on the library’s remodeling project began in November.
“It’s pretty much done, except for a few touchup things,” Hawkins said. “But for the most part, it’s done.”
Hawkins said the library’s board, staff and patrons were understanding throughout the renovation, which included moving 29,000 items.
“I couldn’t ask for a better staff and board members and volunteers,” Hawkins said. “We were open for the entire time (of the remodeling), except for two weeks to lay the carpet. We really appreciate our patrons being patient. They were great.”
Library patron Julia Davis is impressed with the new look of the library.
“It’s beautiful,” Davis said. “The new stacks are very pleasing in that they look permanent and are light in color, making the room appear larger and more homey. The carpet also is very nice. It makes me think of the reading room at the college I went to.”
With the work nearly completed, Hawkins invited the public to visit the library and check out the improvements.
“We’re very proud of it,” she said. “We’re happy to show it off. This is a big deal for Rangely, it really is.”

RANGELY | Radino seniors kicked off the coming of summer with a barbecue on Saturday, June 20.

On behalf of the CNCC Rodeo Club, CNCC faculty, staff and administration, we would like to officially thank all of the volunteers, individuals, local businesses and sponsors who participated in September’s first annual Rangely Rock […]