MEEKER — Colorado’s junior senator, Michael Bennet, appointed in January to replace Ken Salazar when he was nominated for interior secretary, will be here for a town meeting Tuesday. 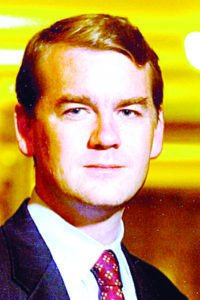 Bennet, a Democrat and the former superintendent of Denver Public Schools, will be in Meeker from 2 to 3 p.m. at Kilowatt Korner, 233 Sixth St.
Michelle Hale, recently elected chairwoman of the Rio Blanco Democratic Committee, was glad to hear the senator will visit northwest Colorado.
“We don’t get a lot of attention out here,” Hale said. “We don’t get attention, but we produce tax dollars for the state. It’s time there is a voice attached to our tax support.”
Hale said the senator’s visit is an opportunity for people to make their voices heard.
“We need to get involved … everyone,” Hale said. “Our voices only count if they are used. In being used, it must be in a positive, corrective, action-oriented process. No mud slinging or blaming, but a positive push in the right direction.”
Hale said Rio Blanco County residents will have a lot to talk about with the senator.
“We need to talk about the stimulus monies that can be used here,” Hale said. “Maybe look at light industry, something to bring in jobs and a future for the Western Slope. For too many years, we have held onto ranching, farming and tourism. That is not enough.”
Michael Amodeo, a spokesman for the senator, said Bennet would visit Garfield, Moffat and Routt counties, in addition to Rio Blanco.
“Basically, we’re just trying to highlight local impacts of what we’re doing in the U.S. Senate,” Amodeo said. “There are a number of initiatives that recently passed, and we want to let people know how these initiatives will impact them in Rio Blanco County.”