RANGELY I Though the event went off well as a whole, there were definite highlights at this year’s Christmasfest, according to organizer and WRBM aquatics/recreation director Camilla Kennedy.
“I think it went pretty well,” Kennedy said. “The Parade (of Lights) was beautiful this year. We had tons of kids in the Snowflake Baby contest. And breakfast with Santa, I think, was packed.”
The parade included a Meeker Sand and Gravel cement truck decked out in LED lights, a Rangely school bus covered in web lighting, and a spectacular Grinch float by Alliance Energy Service Company (AESC).
Alliance head shop foreman Josh Anderson said that the crew began creating the float last Monday. “That’s pretty much what we did last week,” Anderson said. “I think it turned out real well.”
A record number of entries registered for the parade this year, Kennedy said. The same was true for the Snowflake Baby contest, which featured a little girl in handmade snowflake wings and sisters transformed into Santa Claus and a snowman (correction: snowgirl). Other highlights included a full complimentary breakfast and pictures with Santa sponsored by Blue Mountain Inn. 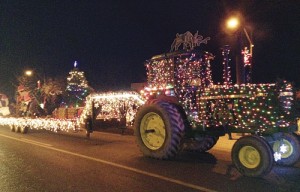 Children visited with Mr. Claus, received gifts, and had stories read by Mrs. Claus while enjoying pancakes, eggs and bacon.
“It was exciting,” Caleb Wiley, 5, said. “Santa gave us a book. I liked Mrs. Claus a lot. She read to us and her dress was great. It was red and white. And long.”
Friday night’s main events fared nearly as well, with between 50 and 60 children having pictures taken with the Grinch at Colorado CPA Services.
Bible Baptist Church took care of caroling while wagon “sleigh” rides from Main Street Coffee were in demand throughout the evening.
“I think I counted six kids who got to the door, saw the Grinch, and decided they were done,” Colorado CPA Services owner and Christmasfest sponsor Matt Scoggins said. “But most kids really enjoyed it. My goal…was to give people a reason to come downtown, and once they came downtown, hopefully they went shopping.”
While some businesses saw customers during extended evening hours, others saw few shoppers stop in. Saturday shopping at vendor booths and the Senior King and Queen crowning at CNCC also turned out low numbers. 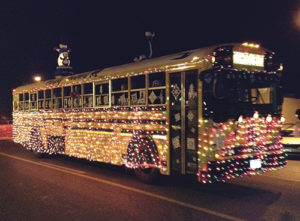 Listen to this post RANGELY I Depending on the event, this year’s Western Rio Blanco Metropolitan (WRBM) Christmasfest saw both high attendance and low turnouts.

Listen to this post RANGELY | The Western Rio Blanco Recreation & Park District is making preparations for the annual Christmasfest celebration, scheduled for Dec. 8-10 this year. The theme for this year’s Christmasfest is […]