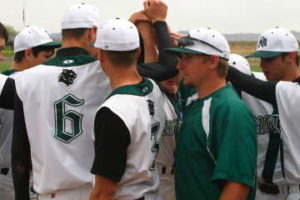 The Panthers managed just two runs in a 3-2 loss to Paonia, which went on to beat Dolores in the championship game, 12-11, in nine innings. The games were played at Canyon View Park in Grand Junction.
“We played a perfect game,” said Rangely Coach Wes Torsell. “They just capitalized, which is what good teams do.”
It was the Panthers’ fifth meeting with Paonia this season, with Rangely winning one of those games.
Still, Chavez kept the Panthers in it, settling down after giving up two runs in the first.
“That was great, allowing just four hits against a great-hitting team,” Torsell said of Chavez. “He threw five scoreless innings. He threw well. He threw very well.”
Rangely ended the season with a 7-9 record and a third-place finish in the league.
Besides Chavez, also playing in their final game for the Panthers were seniors Kanden Brady and Peter Walz.

“We’re going to have a helluva team next year,” Torsell said. “We’re going to be very tough.”
That is, if the Panthers field a team. The school board is considering eliminating funding of some activities, including baseball, to save money. But Torsell, a 2003 RHS graduate, hopes it doesn’t come to that.
“This is a baseball town,” he said. “I grew up here, and there’s always been baseball.”