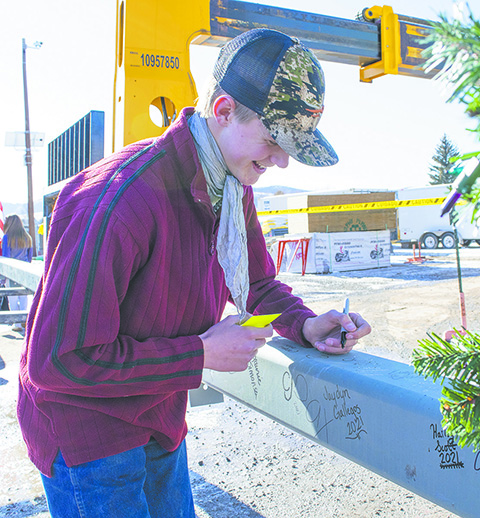 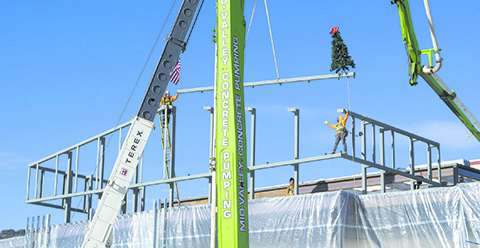 The Haselden construction team is well underway with the building of the new Meeker High School. During the last busy day of finals week for high school students, Haselden held true to the construction tradition and held a “topping off ceremony.”  The history of a topping off ceremony is when the building being built reaches the last steel beam at the tallest point on the build and they “top it off.” This ceremony was celebrated with a lunch donated by the Meeker Masonic Lodge to all of the Meeker High School students, the Haselden team and the Meeker community. During the barbecue, the last beam was out for all of the people in attendance to sign. The beam holds many signatures from the Meeker School board, Meeker alumni and current Meeker students who have been patient with the new construction. A crowd gathered at the dig site where the Haselden team presented the beam and prepared it to be raised and placed on the building. The beam had a flag and a tree on opposite ends. The tree is a practice of an ancient Scandinavian religious rite that places a tree atop a new building to appease the tree-dwelling spirits displaced in its construction. Superintendent Chris Selle thanked everyone for attending and kicked off the lifting of the beam before it was successfully installed by the Haselden crew.

MEEKER | Last year during the early days of COVID restrictions, one of the changes the Meeker School District implemented was the cancelation of in-town school bus routes. “It was kind of a concession when […]

From the Superintendent: Selle welcomes students to new school year

MEEKER I This is an open letter from your Meeker school superintendent to Meeker’s parents, guardians, students and community members: As implied in our district vision statement, “Excellence in All We Do.” our purpose is […]