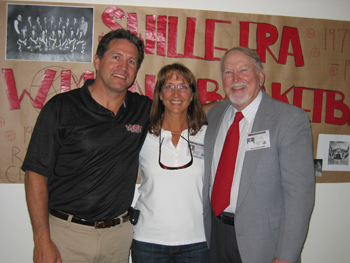 MEEKER I Thirty years ago, Vicky Tate of Meeker and Cheryl Barnhart of Rangely were a part of something that’s never been done since at Western State College in Gunnison.
They were members of WSC’s first Rocky Mountain Athletic Conference championship team in women’s basketball — a feat that has not been duplicated in three decades.
Members of the team, including Tate and Barnhart, who lives in Grand Junction, were honored during homecoming last weekend at WSC.
Tate was a starting guard and team captain for the Mountaineers that season. Team members, along with coach Phil Swille, who is retired and lives in Grand Junction, were recognized for “setting the standards high for Western State’s women’s basketball.”
Swille coached the Mountaineers for four seasons. In a letter to his former players about the reunion, he wrote, “It would be a great time to see everyone, celebrate special moments that have become even greater moments as you look back in time … Let’s all get together and relive those times of ‘old war stories’ of long ago. How about the van ride over Wolf Creek Pass? Then there was the game against Idaho State and overtime.”
The 1978-1979 team was only the second in WSC’s history. The group of eight players finished the season with a 20-5 record. During one stretch, the team won 15 of 16 games, and they went unbeaten at home, with a 9-0 record.
The league-champion ’79 team had a knack for winning the close ones, coming out on top in four of five overtime games, including in the first round of the regional tournament and again in the third-place game.
During last weekend’s festivities, members of the 1979 team gathered for a reunion party, rode on a float during the homecoming parade and were invited to meet with the current WSC players and coaching staff.
Latricia Trammell, the current women’s basketball coach at WSC, recognized the lasting contributions of the 1978-1979 Mountaineers team.
“Thank you for building the foundation for Western State women’s basketball,” Trammell said. “Thank you for setting the standards high … and reliving the Mountaineer magic that you helped to create.’
Tate, who is the new physical education teacher at Meeker Elementary School, replacing Debbie Cook, who retired at the end of the last school year, was a three-sport athlete at Meeker. She was a member of the state championship mile relay team, which set a state record, and a two-time all-conference player in basketball.
She also was the first female athlete from Meeker to go to college on an athletic scholarship.
And 30 years ago, she and Rangely’s Cheryl Barnhart were members of a team that made history.

Letter: To the community work group

Listen to this post Editor’s note: Following is a letter from Mayor Mandi Etheridge, sent to members of a community work group, following the work session with Richard Sales about the old elementary school. The […]

Listen to this post Due to the change to energy-efficient lighting in Meeker Town Hall there are about 150 of the 48-inch T 12 fluorescent bulbs taken out.

Letter: Meeker grads say thanks for help in winning scholarship

Listen to this post “A scholarship from Kendall College in Chicago, Ill., will be presented to the team with the highest score in the competition. Please welcome Sage Chapin and Elissa McLaughlin on stage to […]