RANGELY I On April 4, 368 wrestlers from 10 teams, including 100 participants from Rangely and Meeker, joined in the Northwest Colorado Wrestling League’s first tournament of the year at the Rangely Junior-Senior High School.

Of the 53 Meeker wrestlers who participated, 31 placed in the top four in their weight classes, including double-bracketers Ty Goedert (1st/2nd), Cade Blunt (1st/1st) and Connor Blunt (2nd/3rd). Full statistics of Rangely wrestlers’ placing were unavailable, but at least 24 of the team’s 47 wrestlers placed in the top four.
Rangely Youth Wrestling Program head coach Jeff LeBleu said he was pleased with the team’s performance, even as he anticipates wrestlers improving throughout the season.


“You saw kids carrying out what they’ve learned,” LeBleu said. “You can tell they’ve been listening. Now we need to work on takedowns and breakdowns—getting opponents down on the mat at the beginning and breaking kids down through the match.”
Just how that will happen, he said, is simple.
“It’s going to take work, work, and work,” he said. “A lot of it is that they know it, but they’re not comfortable yet doing it. The practice is the only thing that’ll make it come.”
Meeker head coach Carl Padilla, who has been involved with the town’s youth wrestling program for 20-plus years, said this year’s team seems focused and committed to learning.
“What I see with these guys is that they’re really into wrestling, so I appreciate that,” Padilla said. “The younger kids like to chatter and play around, but they stop the chatter when it’s time to learn technique. So they’re going in the right direction.”
For Padilla, a highlight of the Meeker team’s performance Saturday involved wrestlers’ attitudes. The sport’s difficulty can elicit strong emotions, especially after a loss, and the sportsmanship the wrestlers exhibited, whether in accepting a win with grace or consoling a teammate after a loss, was noteworthy, he said. 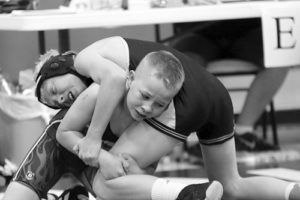 Listen to this post RANGELY I Thirty-seven Rangely youth wrestlers competed in Hayden on Saturday and almost half placed in the top three. But coach Jeff LeBleu was disappointed with how some of them reacted […]

Listen to this post The Rangely Panthers youth wrestling team was in Vernal, Utah, last weekend. Eighteen Rangely wrestlers competed in the tournament, with 17 placing in the top three.

Listen to this post RANGELY I Twenty Rangely youth wrestlers competed in the Bad Dog youth wrestling tournament Saturday in Craig, and many will end the season Saturday in Parachute.