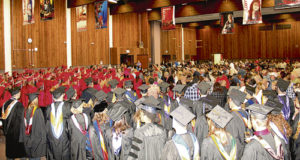 RANGELY I The 53rd Commencement Ceremony was held at Colorado Northwestern Community College in Rangely on Saturday at 2 p.m. in the Colorado Room of the Weiss Student Center.

Regarding the number of students being graduated, the breakdown was as follows: There were 27 degrees or certificates awarded in fall 2016 (December). Prior to graduation, 185 students applied to graduate for spring 2016 for a total of 199 degrees or certificates (some earned multiple.)
Along with these students, 27 students applied to graduate for summer 2016, and those will be awarded in August.

On Saturday, 130 students participated in the graduation ceremony and walked across the stage to obtain their diplomas.
Presiding at the ceremony were: CNCC President Russell George, CNCC Vice President of Instruction Dr. Holly Boomer, Interim Vice President of Instruction Judy Allred, Vice President of Student Services Janell Oberlander, MCAJCD Board of Control Member Mike Anson, RJCD Board of Trustees Member Teri Wilczek and Jean White, member of the Colorado State Board for Community Colleges and Occupational Education.
Speeches were given by: Ray Gregg, the Outstanding Faculty Member of the Year 2015; Robert Meyers, the Craig Student Government President; and Mikayla Pierce, Rangely Student Government President.