RANGELY I Bonnie Long naturally roots for the underdog. After all, she was one.
Long overcame an abusive childhood and for the past 16 years has been a devoted Rangely 4-H leader, with a reputation for helping out disadvantaged kids. 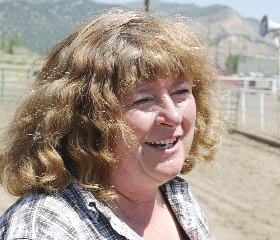 “I like to help out kids that are having a rough time,” Long said. “That’s from my upbringing. That’s kind of my way of paying it forward.”
Like other 4-H leaders, Long has spent a lot of time working with 4-H kids in preparation for this week’s Rio Blanco County Fair. Last Saturday, she and husband Mike were at the fairgrounds in Meeker, helping with the 4-H horse show.
A tribute to Long appears in this year’s fair booklet, prepared by the Rio Blanco County 4-H Extension office.
“She is an amazing leader,” said Dessa Watson, Rio Blanco County Extension agent and 4-H youth development leader. “She literally bleeds green. She spends so much time … well, her life, revolves around her 4-H kids.”
The fair, and especially the days leading up to the event, are a busy time for 4-H’ers and for 4-H leaders like Long.
“The days before (the fair) it wears me down to nothing,” Long said. “By the time I get to the fair, I’m almost a zombie.”
But she loves it. Working with the Panther Country 4-H Club, Long enjoys mentoring 4-H members and watching them learn valuable skills and take on new responsibilities.
“A lot of these kids come from homes that are not so great, but they’re learning how to change,” Long said. “It teaches them how to set goals, and they have to follow through with each of the steps to attain their ultimate goal.”
Long’s husband, Mike, who is from Meeker originally but who attended high school in Rangely, is also actively involved in helping out 4-H, often working behind the scenes.
“I worry he feels left out of all this hubbub,” Long said. “But he contributes a lot to the kids.”
For both Bonnie and Mike, it’s all about the kids and giving them a well-rounded experience.
“We try to make it fun,” Bonnie said. “We’re not so big into we have to win, win, win. Like with the livestock judging, we want to teach them public speaking, organizing their thoughts, things like that. When we went to Calgary (Alberta, Canada for a judging competition), on the way, we panned for sapphires in Montana, we slept under the moonlight in Wyoming, we did a lot of different stuff.”
The Longs took eight club members, all from Rangely, to a livestock judging competition in Calgary. EnCana, where Bonnie works as a measurement technician, helped to fund the trip.
“The kids competed against kids from Canada,” Bonnie said. “They don’t judge livestock the same as we do. In Colorado, we look at size and scale, and up there they don’t. They put more emphasis on structure and body proportion. We had some sheep that, in Colorado, would have won, but up there they were at the bottom of the class. If nothing else, (the kids) now know the difference between miles and kilometers and loonies and dollars.”
Krystin Loman of Rangely was reserve champion senior sheep judge.
“She did a wonderful job and made us all proud,” Bonnie said.
The Longs will take another group back to Calgary in 2011.
“We’ll take half from Meeker and half from Rangely,” Bonnie said. “We’re also going to take delegations from Wyoming and Utah, the Vernal area.”
Bonnie was a 4-H’er in her youth, but only for a couple of years, when she was 12 to 14 years old.
“I was really shy, and right off the bat I got voted as president, of all things, interior decorating club,” she said. “But it boosted my self-esteem.”
Bonnie’s self-esteem suffered as she was moved from foster home to foster home while growing up.
“They had to shuffle me around from state to state in protective custody, because my stepdad had threatened to do me harm, so they kept shuffling me around,” Bonnie said. “He ended up going to prison for child abuse.”
She remembers when she came to Rangely to live with a foster family. It was July 7, 1977. She was 16.
“I remember thinking, ‘Oh, my God, it’s so ugly,’” Bonnie said. “I was coming from California, up by Lake Tahoe, which was one of the nicest foster homes I was ever in.”
But she ended up staying in Rangely. It’s been home ever since.
“I was kind of a dumb kid, I got married really, really young,” Bonnie said. “When you’re dumped out of a foster home, your survival instincts take over. I got married way too young and it didn’t last very long.”
Bonnie and Mike were married in 1981.
“I got married again and this time it’s lasted almost 30 years,” she said.
Bonnie knew Mike from high school.
“He would spit spit wads at me during typing. It was always during a test when he would do that. He still annoys me sometimes,” Bonnie joked.
The Longs’ two children, Roxie and Cody were both involved in 4-H.
Bonnie sees herself in some of the kids who are members of her 4-H Club. And she’s seen how 4-H can make a difference in kids’ lives.
“I like to see the change in the kids and how much they grow,” she said. “You can just see them unfold. You look at them when they get older and think, gosh, maybe you did make a difference.”

Listen to this post Harry Houston Peacock was born Aug. 1, 1927, in Jackson County, Fla., in the home his grandfather, Jefferson Peacock, built. He was the eldest son of Jessie Bodiford and George Clifford […]

Listen to this post Lyle and Diane Peterson (right) are the residential winners of June’s Golden Spade award in Rangely, and Alliance Energy is the business winner (office manager Lonnie LeBleu is pictured). The Golden […]