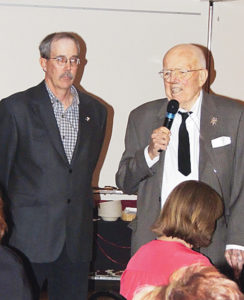 Meeker Fire Chief Steve Allen, left, looks on as Frank Cooley gives the invocation at the 81st annual Meeker Volunteer Fire and Rescue Banquet on Saturday night. A number of awards were presented and the firemen and women of the department were honored for the tireless work they do. 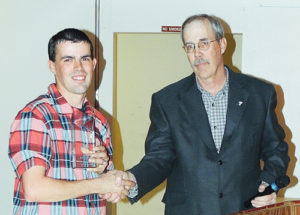 Meeker Fire Chief Steve Allen, right, congratulates and presents the Firefighter of the Year Award to Jacob Jorgensen, left, who has been with the fire and rescue department since 2012. In 2013, Jorgensen attended 12 business meetings while volunteering 239 hours of service. The award was given on Saturday night during the 81st annual Meeker Fire and Rescue Banquet at the Fairfield Center. The department has been serving Meeker and the surrounding community since 1933. 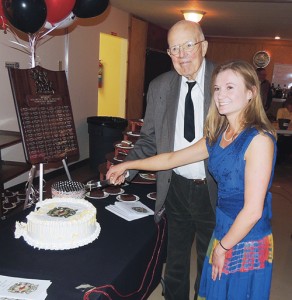 Cutting the birthday cake to signify the 81st birthday of the Meeker Volunteer Fire and Rescue Department, the oldest and youngest members of the department, Frank Cooley and Dehlia Dodd, carried out the honors on Saturday night at the Fairfield Center. Also thanked at the meeting were board members Rich Merriam, Sherri Halandras, Wade Bradfield, Doug Overton and Todd Morris, who is retiring from the board. 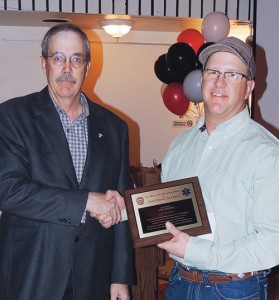 Meeker Fire Chief Steve Allen presented a plaque of appreciation Saturday night to Todd Morris, who is stepping down after a number of years of service on the Meeker Fire District Board. Roughly 100 firemen and women and area residents attended the 81st annual Meeker Volunteer Fire and Rescue Banquet, held at the Fairfield Center in Meeker.

Unusually balmy winter weather contributed to a successful Parade of Lights, despite a few glitches. The parade was followed by a fireworks display courtesy of Meeker Volunteer Fire and Rescue as well as sweet treats […]

Meeker resident Bob Tobin noticed smoke as he was pulling into his driveway near the top of Seventh Street Friday, Aug. 14. “I thought, ‘well, that can’t be good,’ and ran up to check it […]

At Saturday’s 83rd annual Meeker Volunteer Fire and Rescue Banquet, there was the annual ritual to slice the anniversary cake, cut by the newest member in Ronda Morgan, left, and the oldest member present in […]