MEEKER I Alisha Rodebaugh doesn’t mind a little road time.
Rodebaugh, who will be a junior at Meeker High School, played for an 18-and-under girls’ traveling fast-pitch softball team this summer in Grand Junction, which recently won the Triple Crown World Series in Park City, Utah. The team won 11 games and lost one in the tournament. 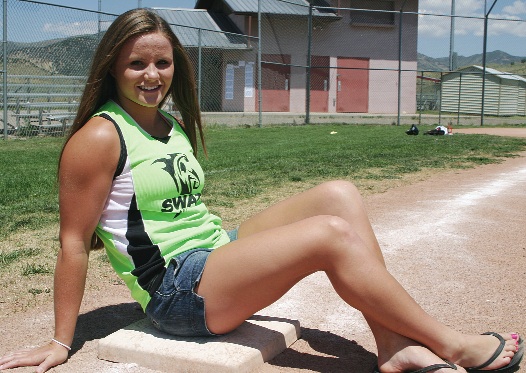 The week before, the team won the Colorado state championship.
Last fall, Rodebaugh commuted to Rifle to play for the high school fast-pitch softball team. Meeker High School doesn’t have a softball team. Rifle won district and finished second at regionals last season. Rodebaugh plans to play for Rifle again next season.
Rodebaugh, who is 16, has been playing fast-pitch softball since she was 9.
“I want to do that for college,” she said of her hopes to continue her competitive softball career. “I want to go to one of the states where softball is big, like Texas or Arizona.”
Rodebaugh, a right-hander, pitches and plays second base.
“I like pitching,” she said. “That’s my favorite.”
In her pitching repertoire, she has a riseball, curveball, dropball, screwball, fastball and changeup.
“I throw the curveball, fastball and changeup, mostly,” she said, estimating she can throw her fastball at 60 mph.
One of five children – Rodebaugh has two sisters and two brothers – she grew up playing catch with her siblings.
“Yeah, I used to play catch with them,” she said.
Now, her mom catches for her when she practices pitching.
“No one else will do it,” her mom, Cathy, said. The Rodebaughs live upriver.
Alisha played basketball last season for MHS, and she’s considering participating in track next season. But softball his her game.
“But I may just stick to softball year-round,” she said. “It’s a fun sport.”

MEEKER I Colorado Northwestern Community College is offering a digital image editing class, starting Feb. 23 and going through March 16, from 6:30-8:30 p.m. A digital photography workshop has been rescheduled to start on Saturday, […]

Every now and then a significant date comes to mind. Usually it has personal significance, as it marks a birthday or anniversary celebration for family and friends. Other times it is of a wider significance […]

MEEKER I The Eastern Rio Blanco Metropolitan Recreation and Park District adult co-ed softball season began July 16 with 10 teams and 141 players signed up to play. The standings after week one are as […]