RANGELY I An early fall storm dropped between five and eight inches of snow on Meeker and Rangely Thursday night and early Friday, knocking out many county residents’ power for the better part of two days and severely damaging hundreds of trees.
The perfect storm of causes that led to tree damage and extended outages began with rain Thursday afternoon that later froze to ice on power lines, followed by a heavy, wet snow that accumulated on the lines and on trees still dense with foliage. Many of the trees’ laden limbs bent or snapped off, coming to rest on already-burdened power lines.
“We were kind of afraid of something like this, what with all the leaves on the trees and the heavy snow and rain,” Moon Lake Electric Association (MLEA) District Manager Bob Kissling said. “Those leaves don’t let go of the snow like branches do. Then the ice and snow was building up on the power lines, and when those lines get heavy, things are going to break.”
A team from Roosevelt, Utah, joined Rangely MLEA workers Thursday night to assess the mounting damage. By Friday morning, additional crews from Vernal, Altamont and Duchesne had arrived in Rangely and Dinosaur, which was also affected by the storm.
In addition to removing trees and tree limbs from downed lines, Moon Lake employees replaced and repaired downed poles, pole anchors and transmission and distribution lines. Snow, ice, and tree limbs unloading from lines, breakers tripped when lines and trees lifted and connected as the snow melted, and a fault in the underground system resulted in repeated cuts to power on Friday and throughout the weekend. 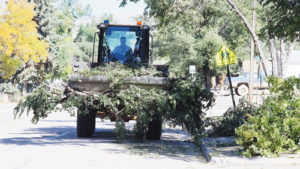 “We just kept trying to alleviate all of the problems as we went,” Kissling said. “You don’t see all of that happen at once very often.These guys put their time in with no complaining. They know their job and what has to be done, and they just do it.”
Kissling estimated that while most Rangely and Dinosaur homes had full power back by Sunday, restoring the system to normal function could take up to two weeks. He credited the success of dealing with the storm’s challenges to the MLEA teams’ collaboration and problem-solving skills and to residents’ cooperation and patience.
The unusual weather conditions, intermittent electricity, and trees succumbing to their burdens elicited uneasiness from some Rangely residents Thursday night.
“I looked out around 11:30 p.m. and it looked like the town was completely dark,” said resident Lendy Lancaster. “It was kind of a weird, eerie feeling. All you could hear was the snapping and cracking of tree limbs.”
Among the worst areas hit were the town’s parks, including Elks Park, the East End Park, and the Rangely Camper Park. One man tent camping at the Rangely Camper Park said that he was pinned between his mattress and a falling limb around 1 a.m. but was able to escape, Rangely Town Manager Peter Brixius said.
Brixius described the Camper Park and the East End Park as “completely decimated” Friday morning, from large limbs that had dropped onto camper trailers to toppled trees that damaged a raw water pump house at the Camper Park. Western Rio Blanco Metropolitan District Executive Director Tim Webber said that crews will remove large limbs and downed Russian Olive trees at Elks Park this week, with the current focus on managing limbs being dropped off at a free tree dump offered by WRBM and the Town at the old Parkview Elementary School site.
Webber spent Friday and the weekend running a front-end loader and coordinating the drop-offs, which were diverted to the new site after the tree dump on Rangely’s east end filled. Webber said they will continue managing the site, with plans to bring in machinery to mulch larger limbs as cleanup progresses.
Although the full extent of the storm’s damage is still unknown, Brixius said that electrical surges have caused damage to the boilers’ electronic controllers at Town Hall and that he expects some homeowners will file insurance claims. More serious potential hazards were avoided, however, like water mains depressurizing due to extended power outages. Brixius said that a generator kept the water plant running for a short time Friday until Moon Lake restored power Friday night.
As the storm geared up Thursday night, Town employees teamed up with Rangely Rural Fire Protection District firefighters to clear large limbs from roads, with employees working to clear drainages and roads throughout the weekend. Local businesses and individuals, from Dave Allred to True Value to teams of people performing random acts of kindness, helped speed up initial cleanup efforts.
“There were a number of tractors out, and those guys were adding a lot of support to the whole effort, getting out there and cleaning some of the streets and yards up,” Brixius said.
As residents and officials mobilized Friday morning, many people were surprised at the different forms help took and the various ways it arrived. And despite the loss and discouragement community members may have felt in the storm’s aftermath, Rangely’s collective story is quickly becoming one of collaboration and mutual assistance.
Next week, Part 2 of this story tells more about the community’s recovery from the storm and the ways individuals, organizations, and groups have united to help each other.

Listen to this post Hoarfrost coated trees around Rangely last week as a winter storm warning predicted up to a foot of snow in the area. Several inches supplemented the thinning blankets of snow around […]

Listen to this post MEEKER I Last week’s early snowstorm swept through the Meeker area and swathed trees still laden with summer leaves under up to 6 inches of heavy, wet snow, breaking numerous limbs […]

Listen to this post It took about 30 minutes for heavy snow to blanket Meeker on Monday morning before it warmed up and started to melt. The snow fell until about 1 p.m., but the […]