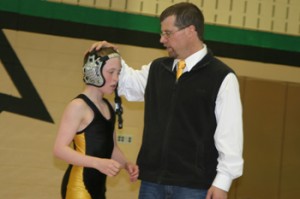 MEEKER I After a dual meet victory last Thursday, the Barone Middle School wrestlers finished second in a tournament last Saturday at Soroco.
“We beat Rangely 43-23 but we didn’t wrestle well,” BMS head coach Lee Overton said of the March 11 dual with the Panthers. “We were in a very tough tournament, with 15 other teams and our kids stepped it up. There was a big difference in the way they wrestled Saturday.”
The BMS Cowboys finished second to Gypsum and Rangely was third. Four young Cowboys wrestled in the championship finals, two were crowned champions and two others wrestled in the consolation finals, finishing with one consolation champ.
Zane Pfau won the 95-pound bracket and eighth-grade classmate Dylan Mobley, who moved up a weight, won his first individual title of the season.
“Dylan really stepped up and beat two undefeated wrestlers,” Overton said.
Eighth-grader JC Henderson also moved up a weight, advanced to the championship match but suffered his first defeat of the season.
Overton said seventh-grader Tristin Pelloni continues to wrestle well. Pelloni finished second in the 80-pound bracket.
Kevin Eli won the consolation championship in the 155-pound class and Tim Barnes finished fourth in the 120-pound bracket.
Austin Purcell, Kenny Kohls, Qynton Larson and Willis Begaye all won matches and were one match away from placing in the top four. Dalton Carson, Josh Winge, Tony Collins, Aaron Cochran, Jake Phelan and Jake Rowland also competed.
The Cowboys will host a dual-meet tournament Saturday at Meeker High School, starting at 9 a.m.

The greatest loss: Those who have lost children can identify with Martin family

MEEKER I When Joe Gutierrez heard about the Jan. 19 accident involving three members of the Martin family and the death of 9-year-old Stone Martin, he knew what the boy’s father and mother were going […]

MEEKER | The Meeker Tea Party will be meeting at Kilowatt Korner Feb. 17 at 7 p.m. Former congressional candidate Bob O’Connell will speak and Jeff Madison is tentatively scheduled to answer questions regarding the […]

Barber on the run

MEEKER | Jason Boudreaux has a lot of stories to tell. Whether you catch him outside the local Go-Fer Foods, run into him on the street, or sit down for a haircut in his barber […]