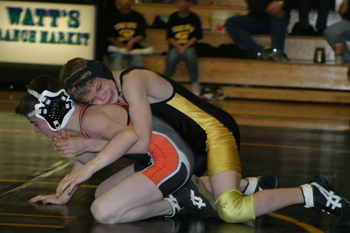 MEEKER I Barone Middle School wrestlers performed in front of a hometown crowd last Saturday, winning three dual meets and advancing 11 wrestlers into the championship round. The Cowboys defeated Hayden, Rangely and Craig in dual meets, then crowned seven individual champions.
“It was great, especially beating Hayden,” BMS head coach Lee Overton said. “They (Hayden) came gunning for us after we won their tournament a couple of weeks ago.”
Hayden’s guns were not big enough, as BMS won the dual 49-35 in the first round before defeating Rangely 51-30, then Craig 54-28.
After all the teams wrestled each other, the two wrestlers with the best records in each weight, wrestled a championship match.
Zane Pfau, J.C. Henderson, Kenny Kohls, Willis Begaye and Kevin Eli won all of their matches, including the championship in their respective weights.
“Zane wrestled real well,” Overton said. ‘He lost to the Hayden kid three times last year, beat him in the dual then pinned him in the finals. It’s cool to see how much he is improving.”
Austin Purcell avenged an early loss by winning the championship match and Tim Barnes also received a gold medal and championship T-shirt.
Dalton Carson, Tristin Pelloni, Jake Phelan and Dylan Mobley all wrestled in the finals and finished as runners-up. Kelly Denny, Josh Winge, Anthony Watt, Aaron Cochran and Tony Collins also competed but didn’t advance to the championship match.
“It just shows how hard they have all been working,” Overton said.
The BMS wrestlers will add a few sixth-graders to their team when they travel to Grand Junction for the middle school, state-qualifying regional tournament Saturday.
“We’re taking 20 kids, including sixth-graders,” Overton said. “I think it’s really cool the sixth-graders get to wrestle with us these last two weeks.”

RBC I Trudy Kareus, executive director for USDA’s Farm Service Agency in Colorado announced Tuesday that FSA has teamed up with the U.S. Census Bureau to encourage all farmers and ranchers to complete the 2010 […]

Congratulations to all the winners and participants of the Rio Blanco County Fair! And kudos to all the individuals, families and businesses who supported 4-H through donations, through the livestock sale, and in so many […]

Kyler Ross struggles to cope with his loss

MEEKER I It still seems like a dream. A bad dream. But the reality is sinking in. “This whole last week, I’ve been thinking it’s a bad dream and I’ll wake up,” said Kyler Ross […]