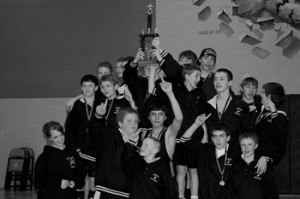 MEEKER I Barone Middle School wrestlers opened the season with four dual meet victories and last weekend won the team championship trophy Saturday in Hayden.
“It was fun, we brought our A-game for sure,” BMS head coach Lee Overton said. “We had been working them pretty hard all week but they were all excited when I held the trophy up on the bus and asked them if it was all worth it.”
Meeker finished first with 154 team points, followed by Hayden with 146 and Craig finished third.
The Cowboys pushed six wrestlers into the championship, crowned three individual champions and placed 10 of 17 wrestlers in the top four.
Eighth-graders J.C. Henderson and Aaron Cochran remain undefeated, each winning gold medals in Hayden and Tristin Pelloni also won an individual title.
“No one took Tristin out of the first period,” Overton said of the seventh-grader’s three first-period pins.
Austin Purcell, Willis Begaye and Dylan Mobley all finished as runner-ups. Zane Pfau, Tim Barnes and Qynton Larson finished as consolation champions and Kenny Kohls placed fourth.
“There were a few times when coach (J.C.) Watt and I were coaching on separate mats and each of our kids had kids in cradles,” Overton said.
Of the 32 matches BMS wrestlers won, 25 were by pin fall. Jake Phelan, Anthony Watt and Jake Rowland all pinned at least one opponent but did not place.
The Cowboys will wrestle in a dual meet in Rangely today and compete at Soroco on Saturday.

The parade is an annual highlight for Range Call. A slide show of the parade and all the results are below.

Dear Editor: Meeker Volunteer Fire and Rescue participated in the annual Fire Prevention Week by going to the schools to give a short program to kids from preschool through fifth grade. The fifth grade classes […]