My first clue was when I saw, in my rearview mirror, the Colorado Highway Patrol car make a U-turn.
At the moment, there wasn’t another vehicle visible on that stretch of road, so I assumed the trooper was either in a hurry to head back the other direction, or he was coming after me.
It was the latter.
Next thing I noticed was the trooper’s flashing lights, so I immediately pulled over.
You know how it is when an officer stops you: You start going through this mental checklist in your head. What was I doing wrong? I knew I wasn’t speeding. I am a notoriously pokey driver. My kids make fun of me because I drive so slowly. So I knew the trooper hadn’t pulled me over for driving too fast.
And I knew it couldn’t be something like having a headlight out, because it was 10 o’clock in the morning.
The trooper got out of his car and slowly walked toward my Jeep. I rolled down my window, and the first thing I said was, “Officer, I’m sorry, but I really have no idea what I did.”
After asking for my license and registration, he asked, “Do you realize, in Colorado, you’re required to have a license plate on both the front and the back of the vehicle?”
I had wondered why I was given two license plates when I registered my vehicle at the courthouse soon after moving to Colorado. I thought maybe one was a spare. You know, like a spare tire. A spare license plate.
I explained to the trooper, who, by the way, was very nice, that I had moved here from Kansas, where you are only required to have a license plate on the back of the vehicle, and I didn’t even have a holder (I don’t know what the technical name for it is) on my front bumper where a license plate could be attached.
Then the officer asked another question: “Did you realize you were driving in the passing lane?”
Again, all I could do was plead ignorance. I explained to the trooper that I worked at the newspaper and I was on my way to the Meeker Sportsman’s Club to take photos at the black powder shoot and I walked almost everywhere and I’ve only probably been on this road (Highway 13) about three or four times and I knew my left turn to the sportsman’s club was coming up, which is why I was driving in the passing lane, but I didn’t know for sure where the turn was and the event was getting ready to start and could we, please, get this over with so I could be on my way.
No, I didn’t say that last part, but that’s what I was thinking.
The trooper, who, again, was extremely courteous, said he was going to give me a warning for both violations, which, of course, came as a huge relief to me. And he went on to say he thought I could buy a kit at an auto supply store so I could attach my “spare” license plate to the front of my Jeep.
In my mind, I was thinking, “If only this trooper knew how non-mechanical I am. Me and tools just don’t mix.”
But I assured him I would take care of it.
Afterward, I shook the trooper’s hand, apologized for the trouble, and was on my way.
I only had about another 50 yards or so to go before I reached the entrance to the sportsman’s club.
While taking photos at the black powder shoot, Arlene Estes, who was there helping out with the event, asked me, “Was that you I saw pulled over by a state trooper?”
“Arlene,” I said, “I think I will stick to walking.”

Speaking of the black powder shoot, I had gone to the sportsmen’s club on Saturday, thinking that was the day of the event, which was what I had written for a news brief that ran in last week’s paper.
Of course, it turns out the event was Sunday. I apologized to Dale Dunbar, one of the organizers of the event, when I saw him on Saturday.
“That’s OK,” Dale said. “At least the information in the ad was right.”
See, it does pay to advertise.

In these uncertain economic times, one thing is certain for Rio Blanco County: We’re all in this together.
It’s nice to see representatives from the various taxing entities in the county working together on the Community Planning Task Force. The group’s first order of business is to secure funding to have a housing needs assessment done. The county, acting as the fiscal agent for the request, has applied for funding from the Colorado Department of Local Affairs.
Besides the need for affordable housing, there are other big infrastructure needs in the county. Finding funding sources for these projects, in this economic climate, will be a serious challenge. But cooperation and collaboration will be essential if the task force hopes to present a united front, which will hopefully help the county’s case when it comes to asking for grant monies.

With last week’s mild weather, most of the snow in my yard had melted, so I decided it was time for one of my least favorite jobs — to scoop poop.
I haven’t had to do that very often since getting a puppy about three months ago, because, for most of that time, my backyard has been covered in snow.
So, needless to say, there was a lot of poop that needed scooped.
After I finished scooping, I checked the bottom of my right shoe, just to make sure I hadn’t stepped in anything, before going back into the house.
I should have checked the bottom of my left shoe.
After walking through the house to gather my things before going to work, I headed back toward the kitchen. That’s when I noticed the poop tracks. After a muttering a few choice words, I grabbed a bottle of cleaning solution and a rag and started backtracking.
Next time I will know to check the bottoms of both of my shoes.

Layla, which is my puppy’s name, is getting used to going for walks on a leash.
She is doing better, but there are still times when she wants to jump up on me, or she gets tangled in her leash, or she wants to chew on her leash, or she wants to stop and smell something. I mean, come on, is it really necessary to smell every lamppost or street sign we walk by?
Layla has quickly figured out the highlight of our walks is going to the video store, where “Aunt Angie” gives her treats.

When I was working on a story about the new Blue Spruce Inn, Sandy Shimko of White River Museum helped me out with some history of hotels in Meeker.
“Meeker Hotel started in one of the soldier barracks in 1883,” Sandy said. “Later, the center of the existing hotel was constructed circa 1896 by Rueben Ball. The Antler’s Hotel, owned by E.S.R. Anderson and built in 1887 by Harry Niblock, was located where the Mountain Valley Bank parking lot is. There was a brick building in that same spot that was called the Park Hotel, and later the Colorow Hotel was in the same place. In the early 1930s, Evelyn Metzger’s mother, Effie Burner, bought the building from Ace Merritt. The name of the building at the time was the Park Hotel, but Mrs. Burner named it the Colorow Hotel when she bought it in 1950.
“The Davitt House was located in the same spot (as the Antler’s Hotel) and was a brick hotel, but did not serve food like the boarding houses,” Sandy continued. “There were two boarding houses on Market Street. One was the Miller House, which was located on the southwest corner of Sixth and Main, and the Deighton House, which was located just west of Gary’s Steak House.”
There have been other hotels in Meeker’s past, according to Sandy’s research, but the only one still standing is the Meeker Hotel. That is, until now, with the addition of the Blue Spruce Inn.

Dan Evig, the Meeker school superintendent, recently announced he will retire at the end of June.
“Barb and I just celebrated our 37th anniversary, and we have some things we want to do,” Dan said. “We have a house here and another house in the southern part of the state, and she has 10 or 15 years of work that she wants done in six months.”
If Dan expected his schedule to slow down after retiring, it sounds like he has another thing coming.

After interviewing Steve Swymer last week when he was in Rangely, I can’t imagine a more enthusiastic supporter of Colorado Northwestern Community College. His enthusiasm is contagious, which would explain why he makes such an obvious choice to serve on the college’s foundation board.

I received a Facebook message last week from Ran Cochran, who wrote, “So, how loudly is Frank Cooley going to laugh when he sees you made him a soldier in World War I?”
Sure enough, in last week’s column I referred to Frank as a World War I veteran, instead of a World War II veteran. I knew better, of course, because I had recently written about Frank and other World War II veterans. But, darn it, it was one of the typos that slipped through the copyediting process.
So, my apologies to Frank. And thanks to Ran for the “good catch.” I think maybe we could put him to work as a proofreader.

Listen to this post It didn’t rain during the Meeker Classic Sheepdog Champion-ship Trials. In fact, there was nary a cloud in the sky during most of the event. The weather was perfect. But rain […]

Listen to this post A couple of weeks ago, I pulled my Jeep onto Third Street in Meeker about 11:30 at night, and right in front of me was a good-sized deer, taking its sweet […] 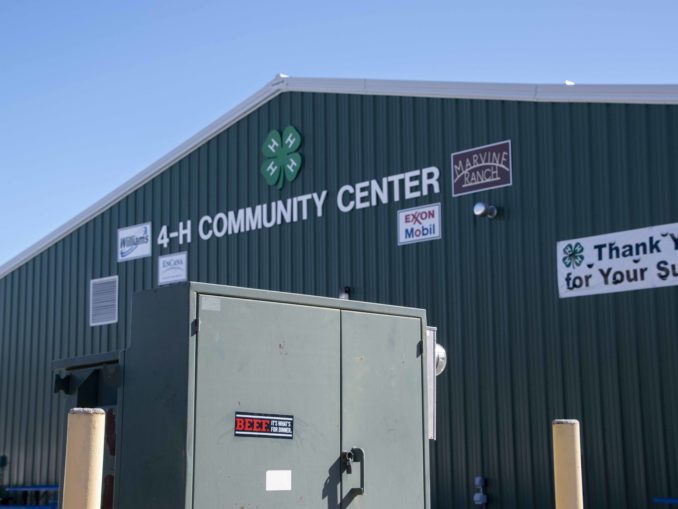