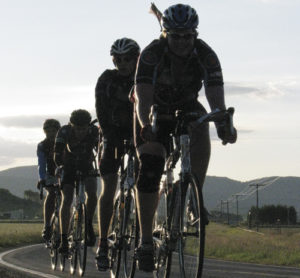 MEEKER I The riders started arriving in Meeker early afternoon last Friday and by 6 p.m., all 32 Bike and Build riders were in Elbert Hall, ready for a dinner prepared for them by the local Methodist and Catholic churches.Bike and Build is a non-profit organization which organizes cycling trips across the country benefiting affordable housing. Founded in 2002, Bike and Build has donated more than $2.5 million and thousands of volunteer hours, partnering with organizations like Habitat for Humanity and Homes for Hope across the country.Over the years, Bike and Build has developed eight cross-country routes. The route the Meeker visitors were on started in Charleston, S.C., on May 23, 2011, and will end in Santa Cruz, Calif., Aug. 11.“Our mission is awareness,” Ashley Tully, one of four trip leaders, said of why they were riding bikes more than 4,000 miles in three months. Bike and Build riders come together for different reasons, some with cycling experience, others without.Becky Short was graduated from Arcadia University in May 2011 with a degree in international studies. Short said she became passionate about affordable housing while studying abroad in South Africa, where she witnessed “horrible housing” issues.A native of New Jersey, Short was already familiar with housing issues and became more passionate about the problem when she returned. She found out about Bike and Build and applied.“I have traveled abroad but have not seen our country yet,” Short said. “This was the perfect way to get involved with affordable housing, see the country and ‘get fit’ doing it.”Riders who apply and are selected have to raise $4,000 for the organization, ride their bikes 500 hours and research housing issues before the trip begins.Riders call this trip SC2SC 2011, and pride themselves on the knowledge they have the most build days (17) of the eight routes and will pedal the farthest. These particular riders spent one week in Colorado Springs where another Bike and Build team built a foundation the previous week. The SC2SC 2011 team came in and built a house on the foundation in seven days.After dinner several riders spoke about the Bike and Build organization, the benefits of getting involved and spoke of projects and people they have met. All were well informed and spoke passionately about their subject. Riders are allowed to stop along the way and were excited to hear Kenney Reservoir was on their way to Vernal, Utah, their next stop after Meeker.One spoke of the experience of meeting so many wonderful people throughout the journey and gave an example of encountering an outfitter that day who asked them to stop at his place between Meeker and Rifle. “I wasn’t sure what to think of all the mounted animal heads on the wall,” the female rider said.Pastor Johnny Arrington, one of the hosts, explained the décor was “normal” around here.“I’m from Boston,” the rider replied. The man gave them drinks and let them shoot a rifle and pistol.“I was shaking after shooting the pistol.”The riders were headed to Vernal, Utah, on July 16, one of three days to ride more than 100 miles.The riders sang a song of thanks to their hosts.“We’ve fed riders for the past four years and none of them have ever sang for us,” Arrington said to the cheering group of riders.

Listen to this post ANNOUNCEMENTS ATV, Boat and Snowmobile Owners! You can now renew your Colorado OHV registrations on line at: www.parks.state.co.us your classified ad or subscription to (970)878-4016 or e-mail to: deb@theheraldtimes.com

Listen to this post MEEKER I Matt Pearce is finishing up his first year working on his doctorate degree in environmental history at the University of Oklahoma at Norman. At the OU History Department’s annual […]

Listen to this post Thank you to the community of Meeker and family of Toni (Carroll) and Brandon Simmons for supporting the benefit auction and bingo held on May 17.