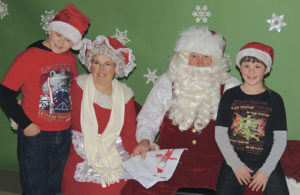 Zacharia (left) and Nicholas (right) Godwin had the chance Saturday morning to talk with Mr. and Mrs. Santa Claus at the annual Meeker Lions Club’s Breakfast with Santa, held at the Fairfield Center in downtown Meeker. Several hundred persons were fed between 8:30 and 11 a.m., and hundreds of children had the chance to talk to the Clauses and let them know what they want on Christmas Day. The event was co-sponsored by the ERBM Recreation and Park District. 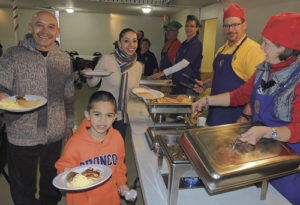 From left to right, Eduardo Valeriano of Guadalajara, Jalisco, Mexico, and grandson Said Rodriguez and daughter Tanya Rodriguez of Meeker were three of the several hundred folks who were fed Sunday at the Meeker Lions Club’s annual Breakfast with Santa. On the right side of the table are some of the Lions who helped to serve the many eaters, who kept the food line busy from 8:30 to 11 a.m. 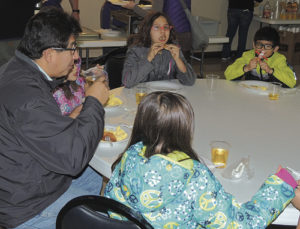 Enrique Silviano, left, brought his family to Breakfast With Santa, put on by the Meeker Lions Club and ERBM Recreation and Park District from 8:30 to 11 a.m. on Saturday at the Fairfield Center in Meeker. Several hundred people enjoyed pancakes, scrambled eggs and sausage with all the fixings as well as juice and coffee. The line was mostly constant from when the doors opened with those to eat and those to meet Santa and Mrs. Claus.

Listen to this post By Paige Jones Special to the Herald Times MEEKER | Any Saturday is a good Saturday when you are surrounded by art and music, and this year’s Meekerpalooza is going to […]

Listen to this post The Eastern Rio Blanco Metropolitan Recreation and Park District and Colorado Parks and Wildlife hosted Family Ice Fishing Day on Jan. 11 at Lake Avery. The fish were biting well, with […]

Separating the good from the bad in Rio Blanco bugs