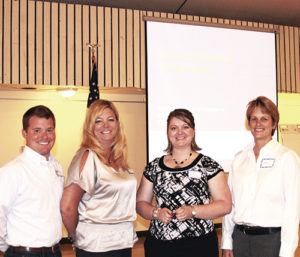 MEEKER I At an economic development planning meeting Monday at the Fairfield Center, approximately 40 attendees voiced their thoughts and ideas about economic development. Participants represented 19 businesses, 13 special districts, boards or organizations, 12 government entities and two concerned citizens.
Meeker Chamber executive director Katelin Cook opened the meeting.
“Our business community spoke out to us, saying we’re one store shy of rolling up Main Street,” she said. “I don’t want us to get stuck with the rear-view mirror approach, meaning ‘we’ve tried that and it didn’t work.’”
Rio Blanco County administrator Kim Bullen presented current community demographics, including tax revenue, jobs, housing, and the condition of the energy industry in the county.
“Community development is a three-legged stool, she stated. “That stool includes the business community, local elected and appointed officials and citizens working together.”
According to Bullen’s presentation, 56.8 percent of every property tax dollar comes from the energy industry. Oil and gas well permit activity dropped 67 percent in 2010-2011. The number of well permits in RBC in for 2008 topped out at 240. Thus far in 2012, only seven permits have been approved.
Natural gas prices have dropped to their lowest levels since 1994, drastically reducing demand.
There has been a 23 percent decline in available jobs since 2008. “I believe that’s related to the decline in oil and gas activity.
As we start to think about the future, we have pay attention to these (energy) industries,” Bullen said.
Following Bullen, Kari Linker, representing the northwest region of Colorado for the state’s office of economic development, facilitated an S.W.O.T analysis with the assembled group, outlining the community’s “strengths, weaknesses, opportunities and threats” as perceived by the participants.
For strengths, participants identified Meeker’s low mill levies, wealth of natural resources – coal, oil and gas, clean air and water, outdoor recreation/tourism, history, agriculture, educated workforce, healthcare/hospital, strong school system, low crime rate, general quality of life, vacation homes, being identified as an enterprise zone, available land
Weaknesses included the small population, remote location, transportation infrastructure, a perceived unwillingness to grow, poor quality workforce, the high cost of living, outside competition, broadband limitations, sales leakage to other communities and the Internet, a challenging climate (long, cold winters), failure to have an active, concerted business recruitment effort, lack of entertainment options, no turn-key business operation locations, isolation, poor job retention and a lack of diversity in the job market.
Potential economic development opportunities listed included incentives from local government to attract businesses, being part of a designated enterprise zone, data center sites (requiring better broadband access), grant opportunities, OHV trails to bring in tourism,
Listed threats: local government not involved in recruitment, lack of long-term goals and follow-through, and the boom and bust cycle, among others.
“It sounds like you might need an economic development office here in Rio Blanco County,” Linker responded. “You here in Rio Blanco County need to create a business climate where businesses want to come and want to stay.”
A stakeholders meeting will be the next step and Linker will return in June to facilitate an Economic Development 101 class for stakeholders and all interested citizens.
The meeting was organized and sponsored by the Meeker Chamber of Commerce, the town of Meeker and Rio Blanco County.

RBC I The Colorado State Parks board voted to reduce the discounts offered to Colorado residents 64 and older. Under the changes, which go into effect June 30, 2011, seniors will receive less of a […]

Ethel Owens strives to be a good shepherd

MEEKER I In biblical terms, sheep, the Scriptures say, know their shepherd’s voice. For Ethel Owens, that is a metaphorical relationship she understands on both a practical and spiritual level.

RBC I The Bureau of Land Management (BLM) issued guidance to its field managers describing how the agency will use its land use planning process to enable local communities, states, tribes, the public and stakeholders […]