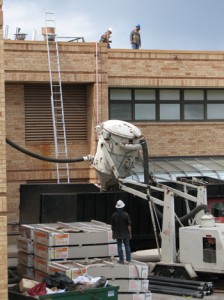 RANGELY I With the configuration of schools changing, the scope of work has also changed for the district’s $15 million construction project.
“We continue to identify and refine the design for additional scope items at RHS and RMS, resulting from the closing of Parkview Elementary,” said John Potter of the Blythe Group, the project manager and architect from Grand Junction, in a report to the school board June 2.
Work, primarily demolition at this stage, is under way at both Rangely’s middle school and high school buildings.
“We’re doing an ambitious project this summer,” said Steve Kraft, the school district’s chief financial officer. “But there will be additional phases … at both buildings.”
The district has three years in which to spend the majority of the bond money approved by voters last November.
“We have to expend 85 percent of the bond issue within three years,” Kraft said. “So we’re certainly looking at a second phase. There will be additional work next summer that will be phased in.
“We’ve got some things hanging,” Kraft said. “Right now, the administrative offices are being housed temporarily at Parkview, but we’re going to need a permanent place to go.”

The board has yet to decide what to do with the old Parkview building.
“If we don’t sell it … we can’t stay there and realize the cost savings that motivated us to go down that road of closing the building,” Kraft said. “A priority (of the school board) is to get a recommendation of where the administrative offices should be located. That will use a little bit of that (bond) money.”
When the school board decided to close the 30-year-old Parkview Elementary building and move preschool and grade-school classes, kindergarten through fifth grade, to the middle school building, it resulted in the middle-school grades sixth through eighth being relocated to the high school.
“When the decision was made (to close the former elementary school building), then that changed what was going to be remodeled,” Kraft said.
So far, with revisions, the district has total budget commitments of just under $12 million for the bond improvement project.
“That’s 82 percent of our bonding,” Kraft said. “Which would leave us $2,723,531 for additional phases.”
One of the additional phases is to expand the kitchen at what used to be the middle school building.
“One second-phase item we’re into right now … is the kitchen at the middle school, which will be the new Parkview,” Kraft said. “They’re locating the kitchen up there. That’s one thing that will probably use up some of that $2.7 million.”
Other revisions have included replacing a retaining wall at the high school and sealing and re-striping the parking lot at the high school. Another issue the board is considering is whether to patch or redo the track at the high school.
“If the board decides they want to resurface (the track), the difference (in price) is about $70,000 more,” Kraft said. “We’re evaluating that, to see what kind of warranty they will give us, because we’ve had trouble with the track in the past.”
The district is receiving a better price on bid estimates for the bond project, Kraft noted, because the down economy is actually working in its favor.
“Because of market conditions, we’re getting very good numbers,” Kraft said. “With the challenging markets for construction companies out here on the West Slope, we’re getting a pretty good bang for our buck, because contractors are hungry.”
Shaw Construction of Grand Junction, the general contractor on the project, is using local contractors and suppliers, when possible, Kraft noted.
“The board felt strongly about getting local contractors,” Kraft said. “Shaw reported it has hired nine local people as laborers. That’s something we’re monitoring.”
In other business from the board’s June 8 meeting, Kraft said the decision was made to move toward a partial self-funded health insurance plan for district employees, beginning next year.
“We have a July 1 renewal for our health insurance plan, so we’re doing another year renewal,” Kraft said. “They made a minor change in the prescription deductible, so the staff will pay a little more out of pocket for prescriptions, but thanks to some pretty tough negotiating, (the insurance company) gave us another 2 percent reduction, which amounts to about $42,000 in additional savings and was enough incentive not to make the transition to a partial self-funded plan.
“But we’re starting down that road (to a partial self-funded plan), but we’re doing it in a methodical, non-rushed manner, so the staff is comfortable with it,” Kraft said. “We’ll get to the point where we’ll select a broker, and then they’ll start meetings with staff next fall.
“Partial self-funding opens it up where we can retain more of the refund,” Kraft said. “We think it will be a better way to control costs.”

Theme: ‘Every Child, Every Day’

Finding ways to improve teacher performance was the focal point —some might say a flash point —for the four-day school week. We clearly need to do a better job of helping teachers meet the classroom […]

RANGELY I There’s no place like home. The Panthers will wrestle in front of a home crowd for the first time this season, hosting a triangular Friday and then following up with its invitational tournament […]