RANGELY — Colorado Northwestern Community College’s dental hygiene program has a reputation.
A reputation that has been built over time. 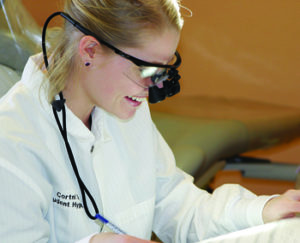 “It’s like any institution that develops into kind of a gold standard,” said Mark Patterson, director of the CNCC dental hygiene program on the Rangely campus, “it doesn’t happen overnight. But over time, it develops a legacy and a reputation. Our alumni have gone on to great and wonderful things. You build on one success to the next.”
The dental hygiene program has been around since 1962, back when the school was known as Rangely College.
“We have been around for almost 50 years,” said Patterson, who has been with the program for 25 years. “We’ve had an opportunity to grow and evolve and improve, and that’s certainly what we’ve done.”
That reputation is what attracted Kristi Jurney to enroll in the CNCC dental hygiene program.
“I knew a couple of ladies who had gone through the program, who work in Craig,” said Jurney, a second-year student from Craig. “I had heard it was the best school around. So I really wanted to go here.”
And the program hasn’t disappointed.
“I like it a lot,” Jurney said, who will graduate in May and hopes to land a job in the Steamboat Springs area.
Jurney said she knew since she was a sophomore in high school that she wanted to enter the dental hygiene field.
“It’s good job security,” she said. “You can get a job wherever you go.”
CNCC’s dental hygiene program has a 100 percent job placement rate for students who successfully complete the two-year program.
“The only (graduates of the program) not working are the ones who choose not to,” Patterson said. “If you average it out over the time I’ve been here, we’ve had 95 to 100 percent on job placement. Our emotional contract with the student doesn’t end on graduation day. It’s kind of like the extended warranty you might get on a car.”

Students who go through CNCC’s dental hygiene program have a similar success rate on first-time attempts taking the clinical and written national board exams. For the small number of students who don’t pass the board exams the first time around, they are virtually guaranteed to pass the next time.
“We have absolutely 100 percent (success rate) if anyone needs to take it a second time,” Patterson said. “If a student is unsuccessful on the (first) exam, we have a support system built in, tutoring them to get prepared for the second attempt.”
Second-year students, like Jurney, took the national written board exam on March 24.
“It’s an all-day exam that is comprehensive of the entire two-year curriculum,” Patterson said. “It’s a very difficult exam. Usually, they get the results about a week or two after graduation. This was the last year for the written exam, as far as doing it in a pencil and paper format. Next year, we’ll go to an online exam and students will have to go to a testing center.”
Clinical tests for the second-year students will be conducted May 1-3 on the CNCC campus.
“We’re a remote site, so they will send a team of examiners out here,” Patterson said. “Students will have to screen and provide a patient, in advance, who meets specific clinical parameters. Most of the students already have a patient screened and selected. They will have to do an assessment of a patient and then present a treatment selection to examiners. Then they have three to four hours to provide treatment.”
Everything the second-year students have been taught during the last two years has been focused on preparing them for the national exams.
“We begin to acclimate them in this process very early on,” Patterson said. “It’s a way to set different benchmarks through the program. They have to do a kind of mini version of a board exam at the end of each clinical semester. So, for four semesters, we are getting them geared up for having to do it for real. It’s worked really well. They are not allowed to sit for final exams if they haven’t met those benchmarks. They have to show the performance, show the competency at all of these various levels.”
There are 54 students currently enrolled in the CNCC dental hygiene program; 27 first-year students and 27 second-year students. Of those students, there is only one male student.
“We have had classes with as many as four (male students) in one class,” Patterson said. “Lately, we seem to average one male student every other year. It pretty much reflects the demographic of the general population in dental hygiene.”
Two of the major factors in the rise of the CNCC dental hygiene program are faculty stability and improvements in the program’s facilities and equipment.
“When we added a fifth full-time instructor and a clinic manager in 2004, we increased enrollment in the program,” Patterson said. “We went from 20 to 27 in a class, and we’ve been filling the classes every year since. We went from 40 to 54 students in one year. That was a significant increase. It was estimated, the impact (of the additional students) on the local economy would be about $160,000 a year.”
In 2003, the dental hygiene program was awarded a $600,000 grant from the Colorado Department of Local Affairs, with the funds going toward a $1.7 million renovation of the program’s facilities.
Having a dedicated and stable faculty and staff, who take their role seriously, means the CNCC dental hygiene program will continue to produce competent and qualified graduates, Patterson said.
“When you have the right folks, and the chemistry is right, and people are in this community because they choose to live here, not because it’s the only place they could find a job, that makes a big difference,” Patterson said. “We see ourselves as the gatekeepers to the public, making sure no one exits this program who has not met the minimum requirements, and giving assurance to the public that they will receive quality care.”

Rangely College separated from Mesa College in 1970 and in July of 1974, Rangely College officially became Colorado Northwestern Community College, a name change that reflected the many communities the College was serving.

RANGELY | At Rangely’s regular town board meeting Jan. 22, Don Reed informed the board Deserado Mine is out of compliance due to its certified operator leaving and asked the water department if it could help with […]