RBC — Rio Blanco County residents who showed up to hear what Democratic Sen. Michael Bennet had to say also had a chance to make their voices heard. 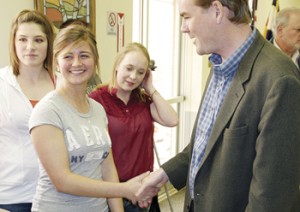 They hope Colorado’s junior senator was listening.
“I really hope that he heard what was said and will actually take it to heart and act upon some of the issues,” said Elaine Urie, a member of the Rangely Town Council.
But Urie, for one, doesn’t have a lot of confidence that will happen.
“My heart tells me he was chosen because he is just like the rest of them,” Urie said of Bennet, who was the surprise choice by Gov. Ritter to replace Ken Salazar, after Salazar was nominated by President Obama to become the interior secretary. “That is, far left. It goes in one ear and heads out the other, and he is back to doing the agenda of the far left. Our governor chose him, and I am sure that choice was for a reason — for his agenda. My hope is that he is for the people, and not some of the people. Time will tell.”

MEEKER I Dee Weiss will host a meet and greet with state and local political candidates Sunday, March 7 at the Fawn Gallery in downtown Meeker. “Some of the state candidates will be here,” Weiss […]

RBC | The first organizational meeting for OHV enthusiasts, will be Oct. 19, at Kilowatt Korner in Meeker at 7 p.m.

MEEKER I I stop at the VFW to have a beer. I run into Mike Gould and over the laughter and music blaring from the juke box, he tells me sadly of Odelle Buckles’ memorial […]