RANGELY I Construction at the school district’s two buildings is progressing on schedule, but whether the work will be done so classes can start by the target date, or soon after, remains to be seen. 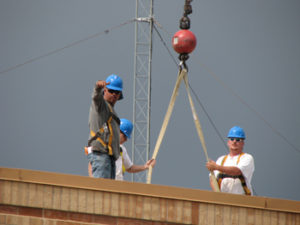 As of now, the project manager — the Blythe Group — is aiming for Aug. 24 as the date the buildings will be ready for occupancy.
“We’re pretty much online at both of those buildings (the elementary school and the combined middle school/high school), and we’ve got the confirmed date of Aug. 24 to have those buildings handed over to us for occupancy,” said Steve Kraft, the school district’s chief financial officer. “But the board had concerns to make absolutely sure that, even if the buildings will be ready, they’re just trying to build up a little padding, in case something unforeseen would come up.”
So, the board, at its June 22 meeting, asked the administration — new Superintendent Barry Williams is now on board — to come back with a plan at the next meeting on Monday.
“The board talked about moving the (school) schedule back a week or so, and they asked Barry and the school administrators to come up with a recommended, revised schedule,” Kraft said.
Classes in Rangely originally were scheduled to begin Aug. 20.
“(The board) talked about possibly a one-week delay (from the Aug. 24 target date),” Kraft said. “It looks like we may just voluntarily adopt a little later schedule (for the start of school).”
Both school buildings are undergoing renovations as part of the $15 million bond election approved by voters last November.
“We’re progressing pretty well,” Kraft said. “Schedule-wise, I think we’re on track. But the board is nervous about having it all completed on the handover date, which is supposed to be Aug. 24. So what they’re talking about is a temporary certificate of occupancy.”
As far as buildings, Kraft said the district’s administrative offices — temporarily housed for now in the old Parkview Elementary School — will be moved to the former wood/welding shop building, southwest of the high school.
“We’ll be in that building (the former Parkview Elementary) until this fall,” Kraft said. “It looks like the BOCES (Board of Cooperative Educational Services) and administrative offices will be located in the shop building, but that probably won’t be until December.”
In the meantime, the board still must decide what to do with the old grade-school building.
“We were hopeful that another government entity or a consortium of entities could find their way to use that building, but so far we’ve not had a lot of success,” Kraft said. “For example, the hospital is looking for a different type of building. They looked at it, but it’s not quite the right location or building configuration for them.
“The ground (the school sits on) is BLM (Bureau of Land Management) ground, so we can’t sell that to a private property, but it could go to another governmental entity,” Kraft said. “Our hope is that if we could find another governmental entity that they would take over the building with all of the structural flaws. We can’t continue to occupy the building and realize the savings (from vacating the building), even if we kept it heated at a minimal level.”
For financial reasons, the board decided to close the old Parkview building and move preschool and K-5 classes to the former middle school building, while middle school and high school classes will be consolidated in the high school building.
As part of the construction project, the board decided to replace the track at the high school, rather than repairing it. The cost of a new track is $150,000 versus $80,000 to do the patch.
“We decided to go with the full replacement for the additional dollars, so we’re not just trying patching,” Kraft said. “We looked at a lot of different scenarios. We felt the best value was to go ahead (with the new track), which is a latex polyurethane surface.”
In other business, a reception will be held at 7 p.m. Monday, prior to the board meeting, to welcome new superintendent Williams and honor retiring teachers.
Also, Mark Skelton, the boys’ high school basketball coach, has accepted the job of activities director, replacing Mark Jansen, who resigned and took a teaching/coaching job at Grand Valley in Parachute.

Listen to this post RANGELY I If Jean Hejl is what 90 looks and acts like, people need not worry so much about aging. Jean celebrated her 90th birthday Sept. 22 with about 25 family […]

Listen to this post The Meeker Herald — 125 years ago • The very liberal offer of the Meeker Townsite company should be taken advantage of by our citizens. The company will soon have a […]

Listen to this post ANNOUNCEMENTS ATV, Boat and Snowmobile Owners! You can now renew your Colorado OHV registrations on line at: www.parks.state.co.us RIO BLANCO Masonic Lodge #80 meets 2nd and 4th Thursday, 7:00 p.m., at […]