RBC | Even as the Colorado Secretary of State announced Monday that the “Restoration of Gray Wolves” initiative qualified for the 2020 General Election ballot, Colorado Parks and Wildlife officials in Northwest Colorado are investigating an eyewitness report in October of six large canids traveling together (see video at the bottom of this post) and a separate report in late December of a scavenged elk carcass surrounded by canid tracks in the Irish Canyon area near the Wyoming and Utah borders.

“The [October] sighting marks the first time in recent history CPW has received a report of multiple wolves traveling together,” said CPW Northwest Regional Manager JT Romatzke. “In addition, in the days prior, the eyewitness says he heard distinct howls coming from different animals. In my opinion, this is a very credible report.”

“We have no doubt that they are here, and the most recent sighting of what appears to be wolves traveling together in what can be best described as a pack is further evidence of the presence of wolves in Colorado.” – CPW Northwest Regional Manager JT Romanske in Wednesday’s press release

CPW wildlife managers have confirmed that the tracks around the elk carcass are consistent with those made by wolves, and the condition of the carcass is consistent with known wolf predation. 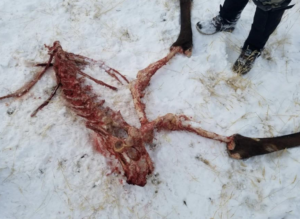 “It is inevitable, based on known wolf behavior, that they would travel here from states where their populations are well-established,” he said. “We have no doubt that they are here, and the most recent sighting of what appears to be wolves traveling together in what can be best described as a pack is further evidence of the presence of wolves in Colorado,” Romatzke said in a press release issued Wednesday. CPW will continue to operate under the agency’s current management direction.

“We will not take direct action and we want to remind the public that wolves are federally endangered species and fall under the jurisdiction of the US Fish and Wildlife Service. As wolves move into the state on their own, we will work with our federal partners to manage the species,” he said.

The public is urged to contact CPW immediately if they see or hear wolves or find evidence of any wolf activity. The Wolf Sighting Form can be found here: https://cpw.state.co.us/learn/Pages/Wolf-Sighting-Form.aspx

For more information about wolves, visit the CPW website.

With Proposition 114 narrowly passing in November, you may be asking “how can I make a difference at this point?” NOW is your opportunity to help hold the State accountable to following through on the […]

RBC I Conservationists are suing the U.S. Department of Agriculture’s Wildlife Services over its carnivore-killing program in Colorado. Included in the larger program are plans to kill up to 120 mountain lions and black bears […]

RBC I Colorado Parks and Wildlife is reminding turkey hunters that they can begin applying for fall limited licenses as of today and running through the July 10 deadline.