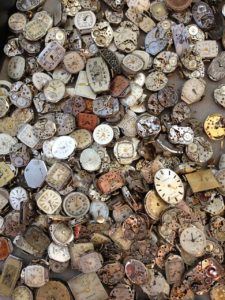 – F.W. Fairfield was able to be around town the past week, with the assistance of a pair of crutches.

– Those of our readers who wish to buy blooded horses should correspond with Mr. Chas. T. Limberg, Leadville, Colo., who is disposing of the entire “Quarter Circle L” brand. Most of these horses are from a $5,000 sire and high bred Kentucky mares.

– Dr. Sam French returned to Meeker Wednesday, very much improved in health as a result of his five months residence close to sea level.

– The Weather Man showed how “ornery” he could be, when he tried, by giving us a nice snow storm last Saturday evening. This was followed by a killing frost, which did not do much damage here as gardens and crops were not far enough advanced to be hurt.

– The Mutual Sewer people commenced work on their enterprise Monday. The work will cover 6,600 feet of sewering.

– According to Patrolman Sam Jones, who investigated, the accident occurred when a Rio Blanco County 1966 Dodge truck driven by Fred Johnson was hit by Henry Jackson Wallace, 87, of Meeker who attempted to make a left turn onto an access road as the county truck was in the process of passing Mr. Wallace. The drivers of these two vehicles were lucky to walk away without so much as a scratch following a truck-car wreck three miles south of Meeker on Colorado 13 early Monday afternoon.

– Mrs. Alice Cunningham, who has completed 32 years of teaching in Rio Blanco County, 23 of those happy years as first grade teacher in the Meeker Elementary School, was honored last month upon her retirement.

– Rio Blanco County Cattlewomen will be honoring Father’s Day with their “Beef for Father’s Day” drawing for two $10 gift certificates for dad’s choice of beef.

– The Rio Blanco County Weed Department will soon be spraying the Hay Gulch area to control the spread of leafy spurge.

– Friends and acquaintances from many years back gathered once again last Saturday evening for the annual Old Timers reunion. Most of the estimated 250 individuals attending took advantage of the “getting-reacquainted” time preceding the 7 p.m. dinner time. This year’s theme was “Empty Saddles,” with President Joe Sullivan, his other officers and committees combining to put together another very enjoyable evening.

– Rangely’s city council Monday night spent most of the meeting time on vandalism problems during the past few weeks. For the first time in the city’s history, a great amount of damage was done by members of the graduating class who went on a “painting party” shortly before graduation and defaced some 20 buildings in Rangely.

– The Rangely Days Parade of Progress is ready to move ahead down Main Street at 10 a.m. this Saturday morning, thanks to the support of over 50 of the local business and professional people of Rangely.