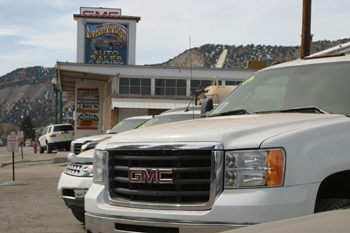 MEEKER I When Doug Over-ton of Northwest Auto Sales and Service decided to pursue arbitration — after General Motors announced it wasn’t renewing the franchise — he knew there was no guarantee.
Turns out, it was the right call.
“It was a big decision to put the money into it. It was like reading tea leaves. Do you just give up and go away? Or do you put the money into it and hope you can get it back?” said Overton, co-owner of Rio Blanco County’s only new car dealership. “It was just one of those chances you take. But it was worth it to me to put some money into it. Arbitration never got that far, but I was going to have to appear. There were arbitration costs and lawyer costs.”
GM announced it will reinstate 600 dealerships. Overton received word three weeks ago that GM would reinstate the dealership. He waited to comment until an attorney was able to review the paperwork.
“There are 13 points,” Overton said. “It looks like we’ll be able to do everything they want. It’s mostly stuff that has to do with the original dealership. GM just won’t take anybody. Of half of the dealers they kicked out, they invited about half of them back.”
Northwest Auto was one of about 2,000 dealerships nationwide that was notified last summer by GM that it would not have its franchise agreement renewed as part of the automaker’s bankruptcy reorganization.
The dealership experienced the effects right away.
“Not in the service, but when they announced that, they immediately suspended us from ordering new vehicles,” Overton said. “(The warranty work) was not going to go away until October of this year (when the franchise agreement was set to expire). We are still able to do the warranty work. Technically, I’m still a dealer. I just can’t order vehicles. It’s not reinstated yet. I’m still working on the 13 points. I have 60 days to get that stuff in to them, but I’ll have it in (last) week. So we will need to get some (vehicles) ordered.”
A local letter-writing campaign may have helped Northwest Auto’s cause.
“A lot of people wrote letters. They just did it on their own,” Overton said. “I wonder if that didn’t have something to do with their decision to pick me.”
Overton said Northwest Auto will be the only GM dealership in northwest Colorado.
“I believe it is,” he said. “It’s the only GMC dealership in northwest Colorado, beings how Victory (Motors in Craig) didn’t pick theirs back up. They didn’t apply for arbitration, and if you didn’t apply for arbitration, you weren’t considered for reinstatement. So, we’re excited, and we’re going to try and take care of everybody.”

Listen to this post Don’t you wish you could bottle this weather and save it for January or February when it’s -30? According to most of the weather prognosticators, this weekend will be the peak […]

Listen to this post MEEKER I How do you “earn” Mountain Valley Bank Bucks? • Bring your friends and family and check in at the MVB Bucks booth — set up at the ATM. We […]