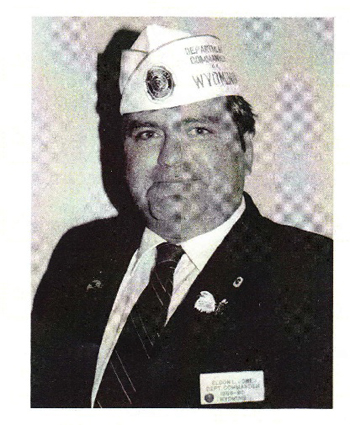 Eldon L. “Skeeter” Jones, 56, of Cheyenne, Wyo., departed this life Oct. 9 at the Veterans Affairs Medical Center after a long illness.
He was born in Poplar Bluff, Mo., on June 25, 1953.
Mr. Jones served in the U.S. Army from 1971-1979 and worked in the oil fields in Worland and Powell from 1979-1983.
His career started at the American Legion Post No. 44 in 1983. He worked his way up to department commander in 1989.
He moved to Cheyenne in 1990, where he was employed at the VA as the American Legion Department Service Officer putting in endless hours to help American veterans. Due to his illness, he retired in April 2009.
Mr. Jones is survived by his son and daughter-in-law, Clint and Misty Jones and daughter and son-in-law, CharDon and Bobby Hisle, all of Winchester, Ky.; four siblings, Milton Jones, Frank Jones, Kenny Jones and Connie Winkler, all of Colorado; mother, Norma Richards of Casper, Wyo.; four grandchildren; several nieces and nephews; and his companion of four years, Ruth Brody.
He was preceded in death by his father, Milton L. Jones in 1990.
Visitation was held at Wiederspahn-Radomsky Chapel of the Chimes. Cremation followed at Cheyenne Memorial Gardens. Military services were held at the American Legion Post No. 6.

Listen to this post RANGELY I Michael Morton could’ve had his pick of colleges. He picked one he had never heard of before.