UPDATE: According to the Rio Blanco County Sheriff’s Office Monday, county road and bridge crews are working to get heavy equipment to the site of a cabin fire off of County Rd. 14 southeast of Meeker. Deep snow and the remote location of the site have made accessing the cabin difficult.

The cabin collapsed shortly after the fire was reported on Saturday, Feb. 22. Heavy equipment is needed to remove portions of the collapsed building before any investigation or recovery efforts can be made.

Two individuals, Victoria Temples, 63, and a 15-year-old male were reportedly unable to escape the fire. Two other parties who escaped the fire were transported to Denver for medical treatment.

Rio Blanco County Sheriff’s Deputies have been and will continue to be on scene.

RBC | An investigation is underway into the cause of a fire at a remote cabin southeast of Meeker on Saturday, Feb. 22. Two people are believed to have died in the fire, while two more escaped and were taken to Denver-area hospitals, according to Rio Blanco  County Sheriff Anthony Mazzola.

RBC Communications received a 911 call Saturday at about 8 p.m. about a cabin fully engulfed in flames, according to a press release from the RBC Sheriff’s Office. The cabin was accessed by snowmobile.

Mazzola said by phone Sunday that initial observations at the scene indicate an explosion at the cabin. “This was not a normal fire,” he said. Foul play is not suspected.

The names and ages of the victims have not been released, pending notification of next of kin. 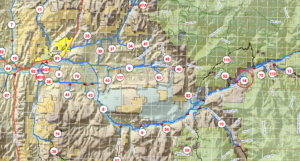 Getting officials into the scene to recover the bodies and investigate the incident is the current focus, as the road to the cabin is not maintained in the winter months.

This incident is actively being investigated by the Rio Blanco County Sheriff’s Office with assistance from the Colorado Bureau of Investigation (CBI), Meeker Fire & Rescue, and the Colorado Division of Fire Prevention & Control (DFPC).

No photos of the scene have been released by officials.

This report will be updated as further details are released.

Fire season is not over