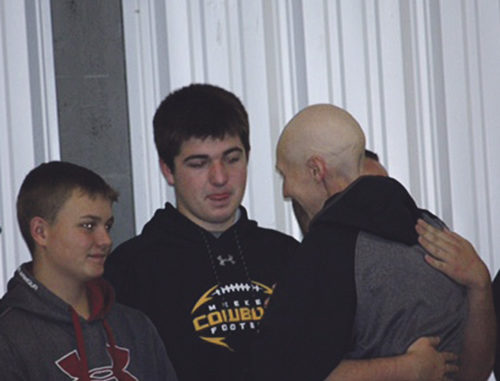 The Meeker High School football team held its annual banquet last Sunday, where the players thanked everyone for supporting its Touchdowns for Kris pledge drive during the month of October, for Barone Middle School teacher Kris Casey. The Cowboys scored 21 touchdowns in the month of October, resulting in a generous donation to assist Casey with the costs of her cancer treatments and try to provide financial relief to her and her family at this time. During the banquet, 11 Cowboys were honored by the Northwest League, including in back; Jacob Pelloni, James Amick, Tannen Kennedy, Brayden Woodward, Eli Newman and Logan Hughes. In front are; Ridge Williams, Eli Hanks, Doak Mantle, Trapper Merrifield and Luis Villalpando. Williams, Villalpando and Hanks were all honorably mentioned by the league, while the others were named to the first team. Hughes was also named the Northwest League player of the year and was also chosen to play in the all-state game this summer.
Becky Hughes photos