RANGELY I Mark and Cheri Smith were at the age where they had raised their two children and were looking forward to someday being grandparents.
Instead, their lives took a drastically different turn.
And they haven’t regretted it for a minute.
Mark and Cheri were 45 and 42, respectively, when Emma was born in 2006. Two days later, they decided to adopt her. Their lives haven’t been the same since, but in a good way.
“It’s fabulous,” Cheri said. “You definitely get more tired (being a parent in her 40s). You forget how busy they are (a child who is 3). But you have more patience. You appreciate each different stage, from the newborn stage to the temper-tantrum stage. You know they are stages, and they will pass.”
“It’s been a life change, but I enjoy it more now that I’m older. You just get a lot more tired,” Mark added with a laugh.
Not that there haven’t been lifestyle changes with Mark and Cheri adopting Emma.
“The biggest adjustment is not being able to do what you want to do,” Mark said. “It takes a little getting adjusted to, but once you do it’s like, where would we be without her? No, I wouldn’t trade it.”
“Anymore, the 40s for raising kids is not that unusual,” Cheri added. 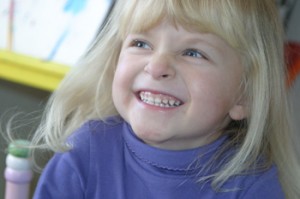 Emma’s birth mother, who is related to Mark and Cheri, was in no shape to care for her when she was born. So, the Smiths were faced with a life-altering decision, and not a lot of time to think about it.
“(Emma’s birth mother) was having some drug issues, and we knew Emma was going to go into foster care. So we had two days to decide whether to take her or not,” Cheri said. “We knew if we took her, it was forever. We went up into the hills and we walked and walked, and we talked and prayed. It’s a forever decision you make to raise a child. It’s not just 18 years. It’s a lifetime.”
The Smiths have two other children, both grown, who were supportive of their parents’ idea to adopt Emma, with some reservations.
“(Daughter) Brooke’s concerns were, ‘Do you guys really know what you’re getting into? Are you still going to enjoy being grandparents?’ But I knew my grandchildren would be loved and cared for, and Emma deserved the same,” Cheri said. “(Son) Blake said, ‘I will help any way I can, but I won’t change a diaper,’ and he hasn’t. But he’s been great. I’m so glad we’ve had the family support to do this.”
There’s a 22 year age difference between Blake, 25, who is younger than his sister Brooke, and Emma.
“When Mark’s ready to retire, Emma will be 13,” Cheri said.
A foster family had been in line to take Emma, if the Smiths didn’t, so they had to make the decision quickly on whether to adopt.
“Of course we were nervous,” Cheri said about the prospects of becoming a parent again. “But we both loved being parents. We liked the day-to-day parenting stuff. We liked all of that. So we looked at each other and said, ‘Can we do it again?’ And we said, ‘Yeah.’ I’m a big believer in if it’s meant to be, it will feel right, and it did.”
Cheri has lived in Rangely her entire life, and knew it was a good place to raise a family.
“We love it here,” Cheri said. “It’s a great place to raise kids, and since we’ll be doing that for quite some time, we’ll stay here.”
The Smiths — Cheri works for BOCES (Board of Cooperative Educational Services) and Mark works for Chevron — brought Emma home from the hospital when she was 20 days old. When she was 11 months old, the adoption was official.
Emma, who turned 3 in May, was born about five and a half weeks premature, and as a result, spent 11 days in the hospital. She was 4 pounds, 11 ounces at birth.
“Her birth mom readily admits she did every drug when she was pregnant,” Cheri said. “But Emma was not born with any drug dependency, which is amazing.”
When Emma was 1, Cheri took her to a children’s health fair.
“I was concerned because she had some developmental issues at the time,” Cheri said. “That’s when Horizons (Specialized Services) started visiting us. Once you are in their system, they see what areas your child needs help with and they provide those services in your home.”
Horizons is a support program for families with children who are developmentally disabled or delayed. Horizons, with an office in Meeker, serves the five counties in northwest Colorado and is based in Steamboat Springs.
Natosha Clatterbaugh, a speech therapist from Meeker, would visit Emma and the Smiths once a week.
“We just adored Natosha,” Cheri said. “I was so impressed. They not only work with the child, but at the same time they work with the parents. They give you tips on how to work with your child. It was nice to have someone there offering reassurance that Emma was going to be OK.
“That early intervention is key,” Cheri said. “I wish people could understand that. If you can give (the child) the tools and techniques they need, they can catch up with other kids.”
Emma currently attends preschool at Parkview Elementary and then goes to daycare at Giant Step Preschool and Child Care Center in Rangely.
“If diagnosed (with developmental disability) they can start public preschool at age 3, rather than having to wait until 4,” Cheri said. “It just gives them a head start. Emma loves it, and is doing fine.”
Emma was her given name at birth.
“Emma was named by her birth mom,” Cheri said. “We chose to keep her name. I wanted her to have that connection with her birth mom.”
After giving birth to Emma, the birth mom pretty quickly returned to the drug culture.
“The mom was there for about the first week, then she walked away,” Cheri said. “We didn’t know if she was alive. They call meth the walk-away drug, and it truly is.”
However, Emma’s birth mother eventually overcame her drug habit.
“She has been clean now for over two years and is back in Emma’s life,” Cheri said. “We spend birthdays, Christmases together. Emma will grow up knowing that is her birth mom. It’s an odd situation, but it’s the best outcome we could have hoped for.”
As far as the Smiths’ two other children, “Those are (Emma’s) brother and sister, as far as she knows,” Cheri said.
Brooke, who is 27, is married, lives in Grand Junction and has a 9-month-old.
“That’s interesting,” Cheri said. “We’re grandparents and parents at the same time.”
But the Smiths wouldn’t have it any other way.
“It’s crazy,” Cheri said. “But things happen for a reason, and for whatever reason, we were blessed. She was meant to be ours.”

Listen to this post This last weekend, the Rangely High School track and field team traveled to Cederedge to compete in their 11th annual invitational meet.

Listen to this post RANGELY I Rangely’s sixth annual Makayla Jane Kottenstette Memorial Blood Drive will be held Tuesday from 11 a.m. to 3 p.m. in the parking lot of the Weiss Building on the […]

Listen to this post Teresa Anderson of Meeker was one of the participants in a roping event May 30 at the Rio Blanco County Fairgrounds. Bill Sixkiller of Craig watches the action at the fairgrounds […]