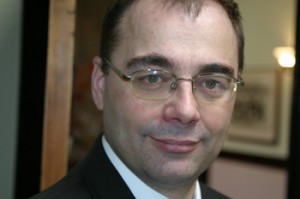 RBC I Joseph Swiger’s a newcomer to Colorado. But, already, he feels at home here.
“My wife and I were raised in a small town, and we like living in a small town,” Swiger said. “There’s a sign I’ve seen that says a small town is like a big family. That’s true, and we like that.”
Swiger and his wife, Teresa, are the new owners of Cochran Memorial Chapels in Meeker and Rangely. They’ve changed the name to Rio Blanco Funeral Homes.
“It’s still being finalized by the lawyers, but for all intents and purposes, (the deal) closed on the 8th,” said Swiger, who arrived ahead of his family. His wife and two sons — Luke, 15, and Nathan, 13 — will arrive March 28.
The Swigers are moving to Rio Blanco County from Juneau, Alaska, where Joseph has been working for about the past 10 years, the past two as the general manager of a funeral home.
“We always wanted to have our own business,” Joseph Swiger said. “For the last 10 years, we have scrimped and saved as hard as we can. We will own this together. We will work it together. We will have an answering service, but unlike most funeral homes left in the world, we’re old school. When you call us at two o’clock in the morning, we answer the phone.”
The Swigers bought the funeral home from Ran Cochran.
“This is my ministry,” Joseph Swiger said. “This is what God has called me to do, to serve families.
“We believe that service is everything in this industry. I have embalmed over 1,000 bodies, and I’ll hold my skills against anybody’s. That’s a gift God has given me. We believe people will find we’re very gifted at what we do and we take a lot of pride in it.”
Both he and his wife are from Sheridan, Ark. Joseph has a degree from the Faith School of Theology in Charleston, Maine. He also has a degree in mortuary science from the University of Arkansas at Hope.
“I come from a long line of preacher’s kids, but I went off to the military and then college,” Joseph said. “I’ve found a degree in theology has helped me in this profession, because I understand people’s religious beliefs. I totally respect all faiths equally. I believe in a person’s right to choose their faith or their abstinence from religion.
“Death and religion are very closely connected,” Joseph added. “We can never forget that, I don’t think.”
Joseph Swiger is coming from a funeral home in Alaska that handled more than 200 calls a year.
“That’s certainly bigger than here,” he said. “We average 60 a year here in Rio Blanco County, and that’s both places combined. So both towns do about 30 a year. The death rate is 10 per year per 1,000, so that’s right at the national average. We don’t pray for folks to die, and we are heartbroken and grieved when they do.
“But the bottom line is, the families are my boss,” Joseph said. “From the time somebody passes away, until everything is said and done, my boss is the family. If you’re burying a loved one, you’re my boss.”

Listen to this post Representative Scott Tipton stopped in Meeker Tuesday at Ma Famiglia on a tour of his district.

Listen to this post Phyllis M. Weiland, a former Meeker resident, was born to Guy McAlister and Gracie Hall McAlister on April 16, 1927, in Pueblo. After a two-year courageous battle with ovarian cancer, she […]