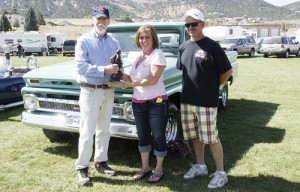 Rangely’s Kent and Brenda Ahrens (center and right) attended the Rio Blanco County Fair and left with a blue ribbon and a special statue. Kent entered the car show and won blue ribbons for “Best Restored” and “People’s Choice” with his 1965 Chevy pickup, purchased brand new by his grandfather and restored by Kent and his dad Gerald restored. RBC veterans officer Joe Dungan presented raffle winner Brenda with a 14-inch maquette of the Veteran’s Memorial, with proceeds going towards the cost of the proposed memorial. “I am very excited to win this statue,” Brenda said. “It means a lot to me as we have a son, Master Sergeant (E7) Cody L. Jackson in the Air Force. Cody has served 15 years, he and his wife Jamie and their two boys, Rafe, 10, and Ramsey, 7, just relocated from Germany to Tucson, Ariz. We also have a son-in-law, Larry Cripps Jr., who is currently serving as a Police Officer (E5) in the United States Army and has served for six years. Larry and his wife Miranda Jackson Cripps and their two girls, Rylee, 8, and Isabella, 5, are stationed at Fort Campbell, Ky. We are very proud of all of them and would like to say a great big thank you.”

Another fair is in the books

Listen to this post RBC | After a couple weeks of intense county fair activity, County Extension Agent Bill Ekstrom, at his office—abuzz with after-fair activity—was philosophical and grateful. First and foremost, he expressed his […]

Time to think about flu shots

Listen to this post RBC I This year, the theme for the Colorado Department of Public Health and Environment’s flu campaign is “Do Something Easy,” because getting a flu vaccination is a whole lot easier […]