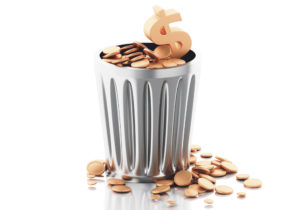 “We’ve been running at a deficit for about three years,” Morlan said. Fees set in 2009 that had industrial waste subsidizing residential costs are no longer enough to keep the landfill from dipping into its fund balance.

The proposed new rate will be $40 per ton for all bulk waste. That means an increase for commercial haulers who currently pay $15 per ton for compacted trash, and a reduction for other waste materials (loose household waste, demolition materials, scrap metal, commercial waste and roll-offs, etc.) which are now charged $58 per ton. The $40 per ton rate would then increase by $5 per ton every three years.

“It’s not a cure all, but the new rate will extend the fund balance to about 12 years,” Morlan said. “We would need to charge $90 per ton to balance the budget for the amount of waste we get. We’re recommending the board adopt a rate increase to slow the bleeding.”

The fund balance—approximately $3.6 million—is money set aside to meet future needs for the landfill, such as the mandated costs of reclamation and budgeting for new “cells” as needed. Jeni Morlan said they budget $80,000 annually just to meet state and federal regulations.

Former county commissioner Ken Parsons explained that when the current rates were set by the board in 2009, the board’s position was to keep the residential rates as low as possible and allow industry to subsidize the cost. In essence, residential customers have been paying less for the last decade while industry’s higher waste disposal costs covered the remainder. Without industry footing the bill, residential customers will need to make up the difference to keep the landfill operating on budget.

“Industry has been subsidizing residential all these years,” Parsons said. “If we want to keep our landfill we’ve got to balance the books on it.”

Commissioner Gary Moyer said the landfill is losing $600,000 a year. It costs approximately $1 million to run and brings in $400,000 in revenue.

“The idea is we’re not going to stop the bleed completely,” said Commissioner Jeff Rector, “But our thoughts and hopes are industry will come back and help us sustain our landfill again.”

The $40 per ton amount is in line, or less than, neighboring counties. Rector said the initial figure they came to was $65 per ton. “We don’t want to devastate the community,” he said.

Morlan said the new rate should only increase the household trash cart cost by $1.54 a week or about $7 a month. If the commissioners approve the new rates, they’ll start in January to give the county’s three local trash haulers a chance to adjust their rates and notify their customers.

Listen to this post RBC | Rio Blanco County Commissioners revisited an unresolved problem with flooding on the properties surrounding the Meeker Airport Monday. Since the airport update was completed, property owners below the airport have […]

First results from water samples in, no analysis yet

Listen to this post RBC | In what may have been the shortest county commissioners’ meeting on record (less than five minutes), RBC commissioners (BOCC) approved items on the consent agenda and gave brief commissioner […]