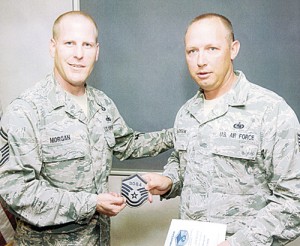 RANGELY I Cody Jackson, son of Danny Jackson and Brenda LeBleu Ahrens, who was graduated from Rangely High School in 1997 and joined the United States Air Force in September 1997, has recently been promoted to E-7 Master Sergeant. Cody attended boot camp at Lackland Air Force Base in San Antonio, Texas. From there Cody went on to Wichita Falls, Texas, for training. His first base station was McCord AFB in Tacoma, Wash. He then transferred to Hill AFB in Utah, and then on to Ramstein Germany AB where he is currently assigned to the 86th LRS (Logistic Readiness Squadron).
Cody has spent the last four years in Germany but will be transferring to Tuscon, Ariz., this summer with his wife Jamie and sons Rafe, 9, and Ramsey, 6.
Cody has been on tours to Iraq, Kuwait, Turkey and Hawaii to mention a few. Cody plans on retiring from the United States Air Force in just over five years. Congratulations E-7 Master Sergeant Cody Jackson.

Listen to this post The Meeker Herald — 100 years ago Surveyor Dan Moog continues to locate good claims for incoming settlers.