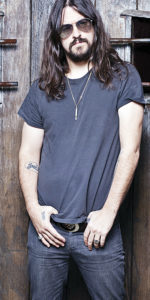 RBC I Country artist Shooter Jennings released his highly anticipated fifth studio album, Family Man, in March through One Entertainment Group. The acclaimed country star has also announced additional tour dates throughout April in support of the new album. The tour, which he will co-headline with Cody Canada and The Departed, features special guest Uncle Lucius and kicked off in Austin, Texas March 19.
Jennings premiered the video for the first single off of Family Man, “The Deed and the Dollar,” on CMT where it instantly became the number one viewed video on the country channel. The video features home shot footage of Shooter with his girls, fiancé Drea de Matteo and daughter, Alabama Gypsy Rose. “The Deed and the Dollar” quickly gained traction at country radio with nearly 1,200 spins weekly and is considered by Shooter to be “the perfect love song.” As the title suggests, Family Man is Shooter’s most personal and introspective album to date, focusing on his home life, the endless temptations of life on the road, his Southern heritage and upbringing, and his unique position among today’s country musicians. Produced by Jennings, the album features appearances by Tom Morello and Eleanor Whitmore.
Son of legendary country singers Waylon Jennings and Jessie Colter, Shooter Jennings is an acclaimed country artist in his own right. He has been active in both country music and southern rock genres and has produced three top 20 country albums since his debut, Put the “O” Back IN Country in 2005.
In 2010, Shooter made his first foray into psychedelic rock with the critically acclaimed Black Ribbons. Family Man marks Shooter’s long anticipated return to the country genre.

A member of the Rangely Rock Climbers demonstrates the agility of his vehicle on piles of big rocks stacked in front of the Meeker Fairgrounds stands on Thursday evening, prior to the demolition derby.

MEEKER I A rodeo was the reason cowboys gathered in Meeker to celebrate Independence Day in 1885 on the town’s square. Now, 131 years later, rodeos are still a big draw, including the Meeker Ranch […]