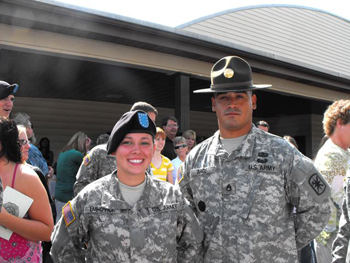 RANGELY | Pvt. Kasey Marie Emhovick of the 795th Military Police Battalion, Golf Company, just completed a 19-week training cycle focusing on team building.
She is the daughter of Lea Anne (Rector) Maloney of Denver, the granddaughter of Carl and Peggy Rector of Rangely, and the niece of Jeff and Rebecca Rector of Rangely.
On June 11, a graduation celebration was held at Fort Leonard Wood, Mo., with more than 215 graduates.
Prior to this training cycle, Emhovick had completed her six weeks of basic training.
Carl and Peggy Rector, Shirley McMullen of Muskogee, Okla., (Peggy Rector’s sister and a former Rangely resident) and Sherry (Shirley’s daughter) and Smokey Roberson of Blue Springs, Mo., were among those attending the graduation.
Emhovick will now be stationed in Fort Riley, Kan.
“This was a proud day for everyone,” Peggy Rector said. “All the family and friends are so proud (of Emhovick).”
Emhovick returned to Rangely with her grandparents to spend a few days here prior to her new assignment.

Listen to this post RBC I Meeker’s sheep men have trailed through town on their way to the Utah desert for the winter, with fewer numbers than in the past. The industry has declined over […]

Listen to this post In cooperation with the Rangely School District, Northwest Colorado Council for Children and Families and Giant Step Preschool and Child Care Center, if you are the parent of children ages preschool […]

Listen to this post Alyssa Mae Magalong of Security/Colorado Springs, a college student and vice-president of student government at CNCC in Rangely, represented Colorado at the Liberty Bowl in Memphis, Tenn., this past New Year’s […]