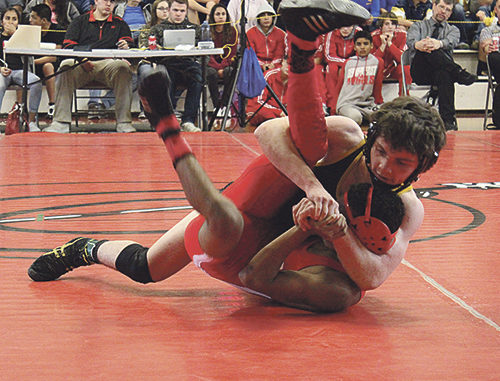 MEEKER | Ten Cowboy varsity wrestlers entered the always-competitive Warrior Classic last weekend in Grand Junction, where seven won at least one match and two ended the year with Warrior medals. The Cowboys will not wrestle competitively again until next year.
“The kids competed very well,” Meeker head coach J.C. Watt said. “I think they are getting better every week.”
Meeker junior Tannen Kennedy won five matches in the 138-pound bracket, including one by pin fall, two my technical fall (more than 15 points) and two by major decision (win by eight or more), with his only loss coming in sudden death overtime, in the semifinals.
Cowboy senior Jacob Pelloni also advanced to the semifinal match before losing his first match of the tournament. Pelloni pinned two opponents and beat another to finish sixth in the 120-pound division.
“Tannen wrestled tough and Jacob placed sixth in a very tough weight,” Coach Watt said of his two placers.
Senior Garrett Frantz pinned two opponents in the 145-pound bracket, while Kesston Hobbs (182) and Ridge Williams (220) both earned two victories in their respective weights and both getting one pin fall. Dax Sheridan (152) and Jake Shelton (160) each pinned one opponent in their respective brackets but did not place. Colton Wille (126), freshman Cooper Main (132) and James Amick (170) were all eliminated after two matches.
“We will start working on conditioning and fine tuning for the upcoming tournaments,” Coach Watt said. “A few kids will be moving weights to be more competitive. We are at a good pace to peak at regionals and state.”