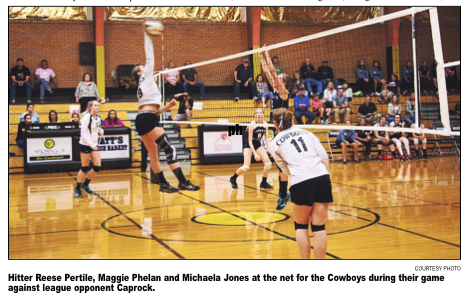 MEEKER I The lady Cowboys split matches last week against league opponents, beating Caprock Academy at home, then
losing to Vail Mountain on the road. Meeker played their county rival Tuesday. Rangely won the match. They will have matches in Collbran Friday and play at home Saturday.
Meeker easily defeated Caprock Academy in three games, winning the first 25-10, then 25-16 and the match with a 25-4 drubbing in the third game.
“We had 90 percent serving average with a 30 percent ace average,” head coach Janae Stanworth said of her team’s serving against Caprock Academy. “Everyone did their jobs offensively and defensively.”
Meeker senior Peyton Burke led the team with 18 serves and half of them were aces, while classmate Reese Pertile had 16 serves, three for aces and sophomore Kassie Luce had 15 serves, with four for aces.
Luce’s twin sister Krissie led the team with 16 kills and Pertile finished with six.
Against Vail Mountain, the lady Cowboys continued to serve well (91 percent) but according to Coach Stanworth, “we couldn’t find the flow.”
Meeker lost the match after four games, losing the first two 25-14, then winning the third 25-21 before losing the match 25-16 in the fourth game.
“We struggled the entire game,” Stanworth said. “We made many mistakes that forced the loss.”
Kassie and Krissie Luce led Meeker with 11 and 10 kills respectively, while sophomore Lila Klinglesmith led the team with 12 serves, including two aces, Burke had 11 and senior Maggie Phelan recorded 10 serves for points.