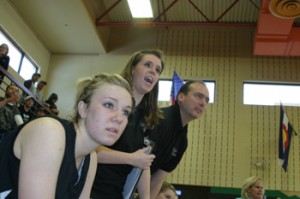 MEEKER I The Lady Cowboys finished fourth in the District 5 basketball tournament last weekend in Rangely and will now compete in the state-qualifying Region 7 tournament this weekend at Standley Lake High School in Denver.
The Lady Cowboys lost to the state’s No. 1-ranked Paonia Eagles 51-31 before suffering a 48-44 loss to the Hayden Tigers in the consolation finals.
“I was pleased with the way the girls played,” head coach Hallie Blunt said of her team’s effort in the district tourney.
Meeker fell behind Paonia early, trailing 12-4 at the end of the first period and 31-10 at halftime.
“Elissa (McLaughlin) and Kaysyn Chintala did a good job of breaking the press, but then we turned the ball over past half court,” Blunt said. “Paonia is a good team and you need to capitalize on every possession. We only did that about a third of the time.”
Seniors Stacey Fitzgibbons and Laura Glass both scored in double digits against the Eagles, finishing with 13 and 10 points, respectively. Junior Becca de Vergie scored seven.
The game was much closer against Hayden, as the Tigers took a 14-12 lead after the first quarter. Fitzgibbons, who led all scorers with 29 points, hit five of eight free throws in the second quarter, helping her team to a 21-20 lead at halftime. Fitzgibbons made 12 of 17 free throws in the game.
“We cut our turnovers down, broke their press and the girls showed a lot more patience on offense,” Blunt said of the Hayden game. “We played considerably better against them this time. It was a heck of a ball game, both teams played well. It was a two-point ball game with 5.4 seconds left to play.”
Hayden’s win might not be an advantage, as the Tigers will compete in the same regional tournament, where only one team advances to the Elite Eight, as Paonia.
Meeker will play Front Range Christian at 3:30 p.m. Friday, with the winner of the single-elimination tournament taking on the winner between Sedgwick and Limon.
“I think the advantage is, maybe the teams don’t know you and you just go over there and play as hard as you can for 32 minutes and hope you get another 32 out of the deal,” Blunt said. “I’ve said all year, these girls play with a lot of heart and confidence in each other. They could certainly go over there and surprise a couple of teams.”

Ralph and Helen Tagert celebrated the arrival of their baby girl, Doris Helen Prockup, on Sept. 3, 1929, in Denver.

Lynn Carroll helped to serve food during last week’s benefit dinner for the Martin family. Vicki Cross and her husband, Phil, who are general managers of the Meeker Hotel and Cafe, organized the fundraising event. […]