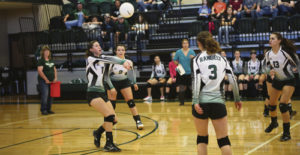 RANGELY I Lady Panthers hosted the Hayden Tigers on Friday for Homecoming. White team took to the floor first and ready to play.
They beat the Tigers in two sets 25-17 and 25-21. The ladies played well and great serving was the key to their win. JV team also won in two sets, beating Hayden 25-21 and 26-24. Serving by Kassidee Brown, Klaire Denny and Skylar Thacker were key in the win.

Varsity was led by the six seniors on the team, they took to the floor for their last Homecoming. They worked well together to win the first set 25-17. The second and third sets the ladies came out ready, winning the sets 25-13, 25-15. Great serving by the Panthers with Lindzey Thacker leading with 12 earned points behind the serving line. Katelyn Brown led the Panthers in kills with 10, Sarah Connor not far behind with nine. Overall a great net game by the Panthers.
Saturday the Lady Panthers hosted Cedaredge. White team had a rough time getting their game together but pushed the the match to 3 sets. They lost the first set 14-25 but came back in the second set winning 25-20 pushing for the third set. Third set came up a little short, losing 11-15, losing the match. Jayleen Kenney had some great serving in the third set. JV started slow and just couldn’t get plays together. Cedaredge beat the JV in two sets, 21-25 and 19-25. The ladies just couldn’t get a good run going. Kassidee Brown led the team with some good serving but they came up short with passing errors.
Varsity took to the floor in the last exciting match for the Homecoming weekend. The lady Panthers trailed early in the first set but rallied back winning the first set 25-22. The Panthers looked better in the second set but still struggled with passing and net play but won the set 25-17. Third set proved to be the excitement for the day, the lady Panthers were behind most of the match until they pulled ahead 22-18 but let the Bruins back in letting them tie it up. The ladies were not done, they rallied behind each other and played their hearts out, winning the third set 27-25.
Great net play, serving and not giving up got the lady Panthers the win. Kaylalle Fortunato led the team with 15 earned points behind the serving line, with Corinne Coombs and Katelyn Brown contributing seven earned points each. Antoinette Dorris spread the sets around having Katelyn Brown and Lindzey Thacker have seven kills each, while Katye Allred and Sarah Connor had six kills each.
The lady Panthers would like to thank everyone who attended the games and they hope to see you all at more games. The Panthers host West Grand on Friday for the Pink Out Breast Cancer Awareness game. They’ll be doing a raffle and a serving game between the JV and varsity game to raise funds that will be donated to Rangely District Hospital mammography department.

RANGELY I The Panther volleyball team and new coach Dennis Rohn prepared to kick off the regular season by testing their skills in a series of one hour matches in Montrose last Saturday.

RANGELY I The Rangely volleyball team traveled to Meeker last weekend for triangular format play. They had two matches Saturday, both league games, against Vail Christian and Meeker.

RANGELY I The Rangely High School volleyball team had a very successful homecoming weekend, beating a solid West Grand team in three games. The victory comes just in time to build momentum going into a […]