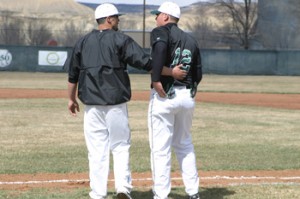 RANGELY I Going into Tuesday’s doubleheader against Paonia, the two teams were tied for the league lead. They still are.
Like the first time the two teams matched up this season, they split a doubleheader Tuesday.
“In the games we’ve lost, we have kind of just self-destructed more than anything,” said Rangely coach Paul Fortunato. “If it comes down to a slugfest, they’re not going to out-swing us, and they know it.”
Kody Denny (3-2) took the loss in the opener Tuesday, while freshman Dillon McTague upped his record to 5-0 with the win in the second game. The Panthers are now 11-2.
Last Saturday, Rangely beat Hayden by big margins, 15-0 and 19-4. Kody Denny (3-1) and McTague (4-0) were the winning pitchers, with relief help from Daniel Garcia and closer Kindal Cushman.
Kody Denny’s brother Kacey hit three triples, while Cushman, Adam Dahl and Jason Stults all slugged home runs.
“We’ve done very well offensively,” coach Paul Fortunato said. “If we can just tighten our defense up, we’ll definitely be solid for playoff time.
This Saturday, county rivals Rangely and Meeker will play two games in Meeker. Meeker and Rangely played two games earlier in the season, with the Panthers winning both.
• • • • • •
The Cowboys have been going the other direction. Meeker is 0-8 so far, having dropped two games to Paonia last weekend, 10-0 and 14-9.
Inexperience and weather have plagued the Cowboys.
“We have a very young team, said coach Joel Matrisciano. “But we’re learning and they are very competitive. We’re struggling with some things, but we’re improving.
“We’re also battling weather,” Matrisciano said. “We haven’t been outside hardly at all until the last couple of days.”
The Meeker coach, who is from Rangely, is looking forward to a rematch.
“We played them twice over there and those were competitive games,” he said. “Those could have gone either way.”

Lots of sunshine and high clouds combine for a beautiful landscape at sunset near Rangely on a recent evening. The weather through the upcoming weekend calls for lots of sunshine mixed with sporadic rain showers […]

Boyd resigns as president of CNCC

Outgoing administrator will take over reins of Mayland Community College in North Carolina RBC I The resignation of Dr. John Boyd, president of Colorado Northwestern Community College, was announced earlier this week by the Colorado […]

RANGELY I An informational meeting for a new support group for families and friends of adult mental health clients will be held at 6:30 p.m. Tuesday, Oct. 26 at 130 Pinyon Circle. The group is […]