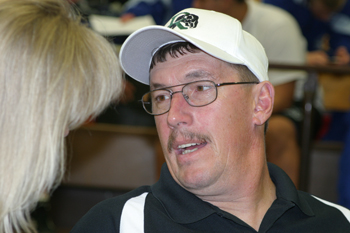 RANGELY I Jeff LeBleu has been coaching wrestling at some level for 20 years. So, it wasn’t like he hadn’t put in his time.
“I’ve been coaching since my 24-year-old (Keenan) was 4,” LeBleu said. “But I need a break.”
LeBleu, who has been the wrestling coach at Rangely High School for the past 11 years, announced at last week’s end-of-the-season banquet he was stepping down.
“It was hard,” said LeBleu, who told his wrestlers about his decision beforehand. “I didn’t want it to be a bombshell. I had five or six parents try to talk me out of it. But it’s like, there’s always one more year.”
Mark Skelton, athletic director at RHS, praised LeBleu for his work with the wrestling team and said he would be missed.
“Losing Jeff is a huge loss as he has been a tremendous asset to the coaching staff at RHS,” Skelton said. “Replacing Jeff is not easy. He was an athlete’s type of coach. We will wait and see when hiring new teachers as to their abilities and also take a look at assistants, etc. The timeline is to do it as quick as possible, so whoever gets the position can prepare for summer.”
When LeBleu began coaching the high school team, he was just happy to be a part of the program.
“I didn’t care if they paid me or not, I just wanted to go to the state tournament,” LeBleu said.
LeBleu’s day job is the public works foreman for the town of Rangely.
“I’ve always worked two jobs,” he said. “This is the funnest second job I’ve ever had.”
Over time, LeBleu put his stamp on the wrestling program.
“When I started, we were taking one or two to state,” LeBleu said. “The last two years have stuck out. Last year, we qualified 11 for state, which was the most ever (at the time). Then this year, I got a state champion.”
The Panthers, who qualified 11 again this year, finished sixth in team scoring at the state tournament and senior Travis Witherell was a state champion in the 152-pound weight class.
This senior class was the last group of wrestlers LeBleu had when he coached peewee wrestling.
“I promised them I would be around (for their senior year),” LeBleu said. “(At the banquet) I thanked all the parents for letting me be part of the kids’ lives. It was a blast.”
At the same time, this was a difficult year for LeBleu personally. His father, Jerry LeBleu Sr., died the same day the team left for the regional tournament.
“The last two years have been very difficult, not because of wrestling, but because of dealing with dad,” LeBleu said. “Last year, when I went to state, they put a pacemaker in, and I wasn’t there for that. We didn’t know how long dad would be around.”
The team postponed leaving for the state tournament this year in order for the wrestlers to attend the funeral for LeBleu’s father.
“They said they all wanted to go to the funeral. That meant a lot to me,” LeBleu said. “When we left, the bus was decorated with balloons, and it was their idea to stop at the cemetery and unleash them.”
LeBleu has a long history with Rangely wrestling. He wrestled for the Panthers from 1977 to 1980.
“I never did qualify for state,” he said. “Back then they only took the top two (from regionals).”
LeBleu said his wife, Teresa, was ready for him to back off from coaching.
“My wife, bless her heart. She’s had to deal with all of the times I’ve been gone,” LeBleu said. “She has really been good with it. She knows it means a lot to me.”
Jeff and Teresa have a son Kasen, who is 5 and has started peewee wrestling.
“Everybody is saying, there’s no way I’ll stay away from it, so we’ll see,” LeBleu said. “I’ll always help Kasen. I’ll just follow him all the way through … and then, like Keenan, he’ll probably end up playing basketball. I suck at basketball, so if that happens, I can just watch.
“But I’ll be around. It’s not like I’m going anywhere.”

Listen to this post After a long hiatus, Roxie Long-Leischer of Rangely will make her return Friday, July 24 at the Cheyenne (Wyo.) Frontier Days,