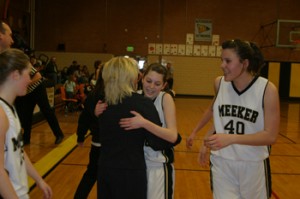 MEEKER I “It was a big win for us,” Meeker girls basketball coach Hallie Blunt said of the 48-34 defeat of the Soroco Rams, in the first round of the district tournament, played on Meeker’s home court. “The win got us into the regional tournament and now we are playing for seeding.”
Meeker became part of the final four and will play the Northwest League’s No. 1 seed, the Paonia Eagles in the semifinals, held this weekend in Rangely.
Meeker trailed 15-10 after the first quarter and 25-18 at halftime.
“We played fine in the first half, we just didn’t make enough baskets,” Blunt said of the game’s first 16 minutes. “We kept our composure, stayed with our game plan and our defense stepped up in the second half.”
The game was tied at 30 at the end of the third quarter, and the Lady Cowboys put the game away in the fourth with 18 points.
“We held them to five points in the third quarter and five in the fourth,” Blunt said. “Our guards shot the ball well and although Stacey (Fitzgibbons) was double teamed the whole game, she still scored 12 points and pulled down 18 rebounds. Timbre (Shriver) made two baskets, Sage (Chapin) came off the bench and played well, we got some good minutes from Laura (Glass) and Becca (de Vergie) played well in the second half, getting some big rebounds for us. It was a good team effort.”
Fitzgibbons led all scorers with 12 points, freshman guard Kaysyn Chintala hit two 3-pointers and finished with nine, Elissa McLaughlin added eight as did de Vergie, who scored all of her points the second half. Shriver and Chapin each scored four and Glass finished with three.
Meeker will play Paonia in the district semifinals Friday, with the winner playing Saturday against the winner of the Rangely versus Hayden game.
“This is a great opportunity to play without any pressure,” Blunt said of the upcoming game. “Anything can happen in the playoffs, it’s a fresh start.”

Letter: Fourth of July is a religious holiday too

Listen to this post I am not sorry the birth of our nation, the United States of America, has fallen on a Sunday every seven years. America is 234 years old, so the Fourth of […]

Listen to this post Is anyone else glad January is almost over? For some reason, January seems like the longest month of the entire year. Monday, Jan. 31 is Backward Day. For those of you […]