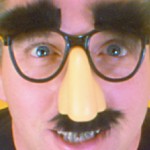 Belt a little tight? Don’t be surprised. According to mashable.com the average Thanksgiving meal in 2009 balanced out at 2,250 calories per plate. That’s more than the average daily calorie intake for most Americans, and a 5 percent increase from 2008. Apparently being forced to tighten our wallets makes us rebel by widening our hips.
The lights are going up! The town got their Christmas decorations up early this year, and now that Thanksgiving is past, the colorful glow of Christmas trees shines through living room windows at night. Usually in competition with the blue glow of the TV, but pretty nonetheless.
Christmas tree lights have an intriguing history. Sometime in the 17th century Germans began attaching small candles to the branches of their Christmas trees with a bit of melted wax or pins. The use of candles continued until 1890, when an employee of Thomas Edison developed the first string of electric lights. Safer light strings were created by Albert Saccara in 1917 following a tragic fire involving Christmas tree candles. Since then, we’ve had bubble lights, twinkle lights, musical lights, big lights, small lights, colored lights, white lights and now LED lights.
You might be frustrated with the high cost of switching to LED light strings for your holiday decorating, they will pay for themselves over time. The benefits of LED (Light Emitting Diode) lights are numerous. They last 10 times as long, don’t heat up over time, are extremely durable, mercury-free and far more efficient than traditional lights.
It’s a busy birthday week for the Frantz family. Happy birthday to Taylor Frantz on Dec. 3, Charlie Frantz on Dec. 6 and Dillon Frantz on Dec. 8.
Also celebrating birthdays this week, Chris Uphoff, Debra Hall, and Pat Johnson, Dec. 4; Tom Charest, Dec. 5; Ty Richardson, Dec. 6; Jerry Wilber, Dec. 7; Laurel Mullins, Dec. 8.
Happy anniversary to Luke and Annie Purcell, Dec. 9.
If we didn’t wish you a happy birthday or a happy anniversary, it’s because we don’t have your special date on file! Please send birthday greetings, anniversary wishes, and other local social news to harold@theheraldtimes.com, or mail information to P.O. Box 720, Meeker, CO 81641.

MEEKER I “Disney’s Cinderella Kids,” a musical production featuring local talent, will be presented at Meeker High School Nov. 4-5. The Friday, Nov. 4 performance will be at 6 p.m. Two performances are scheduled for […]

RANGELY | The correct volunteer and pickup times for Bountiful Baskets in Meeker is 11 a.m. and noon. The Rangely site’s volunteer/pickup times are 9:45 and 10:45 a.m.