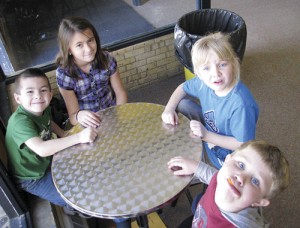 Sixteen teams played for the charity of their choice in the Hoops for Charity 3 on 3 basketball tournament last Friday, sponsored by the ERBM Recreation and Park District. Five local teams won their divisions. The Angry Birds (top left) consisting of Lane Anderson, Braydin Garcia and Brady Potez, played for the Giving Tree and won the third- and fourth-grade division. (Top right) Eli Hanks, Pake Burke and Stephan Walsh won the fifth- and sixth-grade division as Team Walsh, playing for 4-H. Team Bernard consisting of Nick Burri, Logan Hughes, Sam Nieslanik and Ty Dunham won their division playing for the Meeker Streaker. Jace and Reagan Mobley, Jada Turner and Cade Blunt did not play but enjoyed each others company while the tournament was being played. Meeker’s team Tebow (Dylan Mobley, Nate Walsh, Jeremy Musgrave and Ben Fitzgibbons and Team Ridings (Taylor Neilson, Piper Haney, Aly Ridings, Sydney Hughes and Deena Norell) each won their divisions and three teams from Craig won the others.

Listen to this post MEEKER I Following fantastic performances at the Southwest Conference Championship Meet last Friday and Saturday for the Moffat County swim team, five girls are headed to state.

Listen to this post Trysta Welle (right) was not happy about her visit with Santa Claus but her crying didn’t keep her big sister Sarah from getting comfortable and giving Santa their wish list.

Listen to this post Paintbrush Park will be busy every Monday, Tuesday and Wednesday in the month of July, as games in the annual adult recreational coed softball league, sponsored by the ERBM Recreation and […]