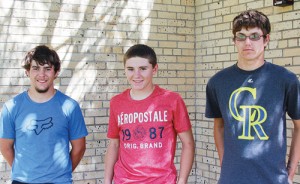 “Tanner caught most of our games and was great at throwing out would-be base stealers,” head coach Jason Browning said of the senior named first team WSL All-Conference. Frantz was honorably mentioned and Garcia was named to the first team as a utility player. “Matt pitched well all year, and although he didn’t get a lot of wins, other coaches felt he was worthy of the honor,” Browning said. “Hunter played every position on the infield and second highest batting average on the team behind Tanner.”

Listen to this post MEEKER I The Meeker High School boys’ baseball team lost a doubleheader in Hotchkiss on Saturday, and, if the weather cooperates, the Cowboys look to rebound as they will host the […]

Listen to this post MEEKER I “Paonia is always tough,” Meeker head baseball coach Jason Browning said. The Eagles were in Meeker on Saturday and won a doubleheader held after a JV game at Paintbrush […]

Listen to this post The Rangely Panther baseball team defeated the Meeker Cowboys last Saturday 12-1 in the first game and 9-8 in the second, on a cold day.