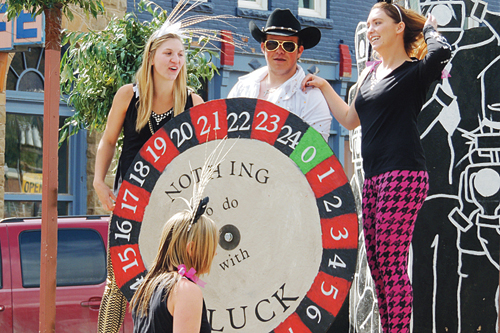 The senior class float carried out the theme of “Las Vegas Style” for the homecoming parade on Friday afternoon down Main Street. Running the roulette wheel, from left to right, were Taylor Neilson, John Mac Sheridan and Mariah Jensen while Deena Norell walked alongside. 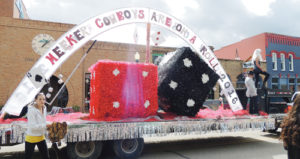 The sophomore class at Meeker High School did a great job of construction and decorating while sticking with the “Las Vegas Style” theme on their float Friday in the MHS homecoming parade. 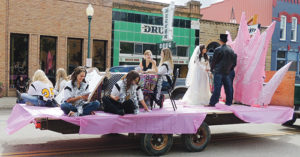 The junior class float at Meeker High School well represented the 2013 homecoming theme of “Las Vegas Style” with a mini wedding chapel and a poker table and other decorations reflecting on the glamour city of the Southwest. 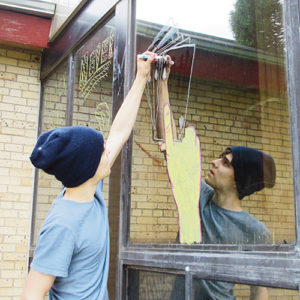 Grand marshals for the 2013 Meeker High School homecoming parade were long-time Meeker Elementary School librarian Kay Bivens and MHS super fan Scott Mobley, a war veteran who attends nearly every MHS athletic event he can, including out-of-town games, and he also helps on the sidelines during home games. The duo was voted to be grand marshals by the MHS Student Council. 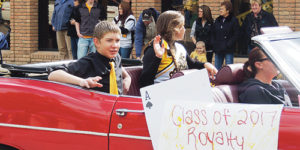 Enjoying the comfort of a convertible and a peek of sunshine early Friday afternoon during the 2013 Meeker High School homecoming parade are Cody Neilsen and Linda Lombardi, nominated for freshman class royalty. 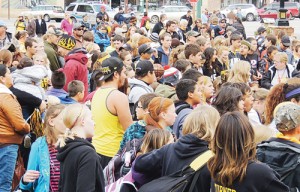 Hundreds of students and adults on the perimeter gathered early Friday afternoon on the courthouse lawn for the Meeker High School homecoming parade and pep rally. Despite rain and heavily overcast skies most of the day, the weather during the pep rally was fairly good, and the event was well attended by students and members of the community.

Members of the Meeker High School football and volleyball team rode the Meeker Fire Department fire truck during Friday’s 2013 MHS homecoming parade down Main Street. Several hundred people were on hand early Friday afternoon for the pep rally to cheer on the teams. 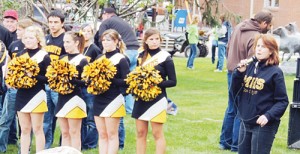 ­Meeker High School Principal Kim Ibach, Ph.D., was emcee during the Meeker High School homecoming pep rally Friday in front of the county courthouse. To the left in the photo are members of the MHS cheerleaders. 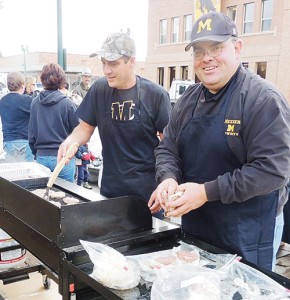 Mark Meyer, left, superintendent of Meeker School District RE-1, and Brett Steinacher, right, the athletic director at Meeker High School, shared the duty to cook hamburgers for the MHS homecoming parade and pep rally held on the courthouse lawn Friday. Steinacher said the number of meals served Friday topped all previous years by between 80 and 100 meals despite the rain and overcast skies right up until the group started serving at 11 a.m. All proceeds went to benefit Meeker High School athletic programs. 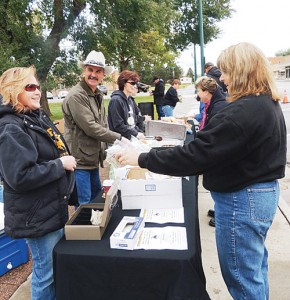 Burgers rolled off the grill Friday noon as fast as the cooks could prepare them in record numbers. From left, Meeker School District Financial Director/Business Manager Janelle Urista and Meeker School Board trustees Bill deVergie and Mindy Burke helped those buying the $5 lunches to gather up their baked beans, potato salad, chips, water and ice cream cups. All money raised goes to the athletic programs at MHS, and there were reportedly nearly 100 more lunches sold than in previous years despite the cold and damp weather. 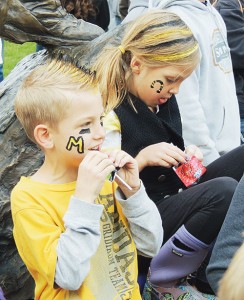 These two young fans are getting an early start cheering for the Meeker High School football and volleyball teams, which both played homecoming games on Friday might. They stood pretty spellbound as the members of the teams were introduced during the MHS pep rally on Friday afternoon on the county courthouse lawn.

Listen to this post Everyone is invited to the Meeker Homecoming parade at 2 p.m. Friday, following a barbecue on the courthouse lawn to benefit the MHS athletic department starting at 11:30 a.m. Meeker will […]

Listen to this post Also taking part in the 2013 Meeker High School homecoming parade was a float that contained the cast of “Alice in Wonderland,” a play that is being sponsored by the ERBM […]